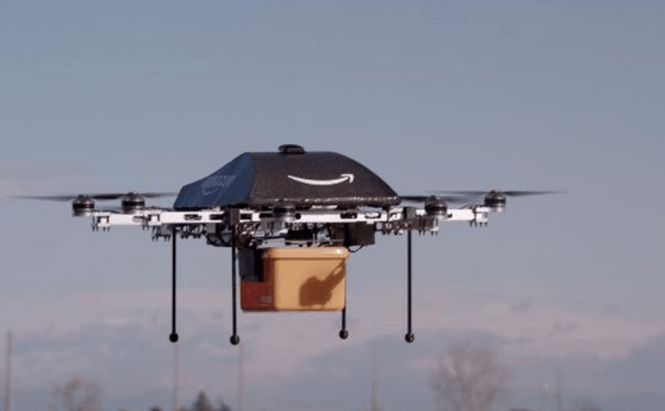 This Tuesday, at a key industry conference in Silicon Valley, Amazon presented its plan for regulating manual and automatically controlled drone flights. It seems that the company wants to take its Prime Air service to the next stage with the implementation of a drone "superhighway". While several interested parties such as the NSA or the Association of Unmanned Vehicle Systems seemed to welcome the proposal, regulators still seem cautious.

According to Amazon's plans, the air space below 500 feet (approximately 142 meters, which at the time is unregulated by the FAA but off limit to drones) should be divided into three lanes. The band between 0 and 200 feet (61 meters) should be reserved for manually controlled drones such as the ones used for agriculture, photography or as a hobby, which generally fly pretty slow. The space from 200 to 400 feet will be used by high-speed automated controlled drones such as the ones employed by the Amazon Prime program. (The drones flying in this airspace should be capable to receive and transmit data about their position, in order to avoid collisions). And lastly, the airspace between 400 and 500 feet should be used as a buffer between the drone zone and the already regulated airspace.

At present, the Federal Aviation Administration is only allowing drone flights limited to the line-of-sight which, of course, isn't good enough for Amazon's Prime Air ambitions. According to the company's representative at the conference, Gur Kimchi (Air Prime cofounder), this plan is "really a call to action. [..] We need to come together as an industry, both public and private, NASA and Amazon, many other companies here.”