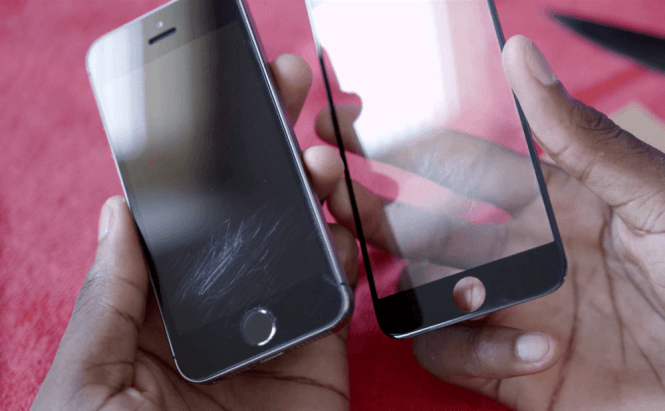 Two weeks ago Marques Brownlee gladdened the public with the demonstration of some rather cruel tests with the new iPhone screen. That was truly impressive as the sapphire display easily survived knife, keys and shoe attack. However, the YouTuber decided not to stop at that point and get more serious. What will happen to the Apple's masterpiece if its owner puts it in his pocket together with a piece of a sandpaper?

Starting with the main result of the experiment, the display turned to be not that invulnerable. Unfortunately, its vicinity to the garnet or emery sandpaper will end badly – in both cases the screen will be covered with small nasty scratches. In his review, Brownlee mentions the Mohs scale that is used to define the hardness of the sample. Any mineral can be described by the number from 1 to 10, and the principle is very simple: one material can damage other substances if the 'Mohs number' of the former is higher than those of the latter. In case of the knife, the number is about 5.5, Gorilla glass is close to 7, and sapphire is about 9, which is extremely high. Using the scale, it is not a problem to explain the results of the sandpaper test. Garnet and emery have the numbers of 7 and 8 accordingly, so they should not harm the sapphire. If the display material is not that pure, the result will disappoint you and the screen will end up in stretches.

What can be learned from this test? The new screen is not made of pure sapphire, but indeed it is a mixture of sapphire and some less hard material. But don't get upset about this fact: in the other case, the price of the phone will be essentially higher. Do we need to waste all our savings to play safe with situations which most likely will never occur?