You kept hearing that Macs aren't great for gaming and you're curious to know which games you won't be able to play on Apple's devices? Here are the biggest titles not available. 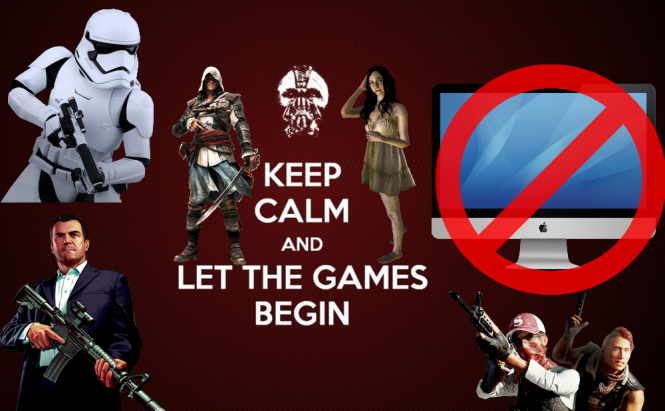 Macs may be great, but when it comes to gaming they have some big deficiencies. It's not only that the performance is terrible in graphic-intensive games such as shooters or action games, but a lot of huge developers simply don't want to go through the trouble of creating Mac versions for their games, so many triples A titles aren't even available on the platform. Here are five games that Mac users only dream about as they can't play them on their devices. This year's smash hit, Player Unknown's Battlegrounds or PUBG as it's commonly known is only available on Windows and Xbox. The one hundred men battle royale has just been officially launched and there is no Mac version in sight or even in the making as far as I know. Truth be told, the game is still pretty poorly optimized for Windows, so I don't even want to imagine how it would run on a Mac. However, the title has had a meteoric rise with over 26 million copies sold, which means that many Mac users would love the chance to play it. Assassin's Creed is one of the most popular franchises in the history of gaming, yet Ubisoft chose to only create Mac versions for Assassin's Creed, Assassin's Creed II, and Assassin's Creed Brotherhood, completely giving up on the platform after that. This means that the latest game in the series, Assassin's Creed Origins, is also not available on Macs, even though the fans consider it one of the best ones yet. The developers created an entire country based on the actual geography of Ancient Egypt, reworked the combat system and came up with new characters as well as an interesting storyline. Another title that's competing for the most popular game of the year, Resident Evil 7 scared millions of players. Biohazard managed to revitalize the entire franchise which was on its last leg and provides lots of hours of adrenaline-filled fun for the fans of the genre. Unfortunately for Mac users, the game is only available for PC, Xbox One and PlayStation 4, so they won't be able to immerse themselves in the insane world created by the game or hate the members of the Baker family who simply can't seem to stay dead. A game that requires absolutely no presentation, Grand Theft Auto V is one of the biggest titles that PC users can enjoy while Mac users cannot. The game doesn't only have a great single-player campaign with Michael, Franklin, and Trevor as protagonists, but its online gameplay is actually even better, offering almost unlimited possibilities to the players. Unfortunately, Rockstar is currently busy creating Red Dead Redemption 2, so a Mac version of GTA V is nowhere in sight. The Star Wars universe has tens of millions of fans, shooting games have millions of fans, so combining the two in an appropriate environment is a guaranteed recipe for success and that's exactly what Star Wars Battlefront 2 is. The players choose between the rebels or the empire forces and join the battles either as ground soldiers, piloting war machines or in fast-paced air-level dogfights. The game also allows you to play as some of your favorite characters from the universe like Luke Skywalker or Kylo Ren. If EA decides to completely droop the loot box system that's temporarily on hold, this will be a truly epic title that won't be available on Macs.

Before you get too salty, you should know that there are some great games available on MacOS, so if you're into gaming you aren't completely out of the picture. However, if video games are one of your main interests, you might want to buy a PC or a console in the near future.