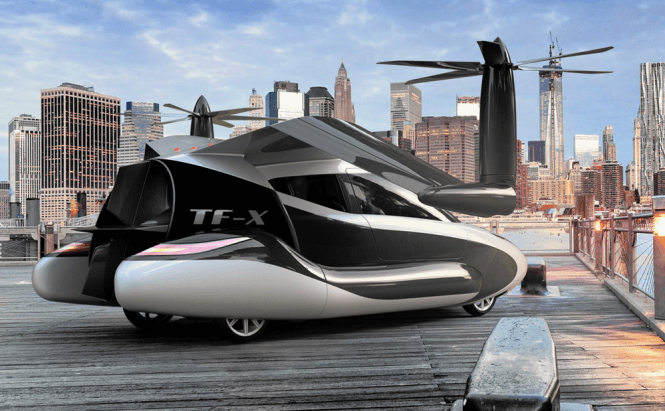 Do you remember the flying car from Back to the Future? At the time, I think we all wanted one of them (at least I did). However, owning one seemed as plausible as getting your very own unicorn or receiving some awesome super powers. Now, that science-fiction concept may be much closer to becoming an actual reality than you would expect. A company named Terrafugia produces a model called TF-X which is one of the most awesome things I've seen in a while. The car, which according to the company should arrive on the market in 2021, is driven like a regular car, fits in a regular single-car garage, and will be a plug-in hybrid with 500 miles autonomy. In case you're curious about how it looks like or about its other features, there's a video below that you can check out. But the TF-X isn't the only flying car in the works. A few months ago, Sam wrote a very interesting story about AeroMobil, another company which hopes to have a working, marketable version of its flying car by 2017. So what makes Terrafugia's plans so special? Well, being totally honest, the company was a mystery to almost everyone until recently, but it's slowly starting to get some attention from the press. Founded in 2006 by a few guys who met at MIT, Terrafugia won the MIT $100K Business Plan Competition with its project and has kept on raising money since then, reaching a capital of $5.8 million. The project in question (called Transition) is no longer a prototype but a fully-working legal car that can transform into a small airplane. Furthermore, they also got subcontracted by DARPA to help create a flying Humvee, so the company seems like the real deal.

Of course there are a lot of complications to sort through such as designated airspace, automated flying and even the special driving / flying licenses that will be required, but I don't believe it's going to take much longer until we see the first cars take off to avoid busy highways. If you're interested in finding more about Terrafugia and its projects, check out their official website.