How to: Make a Privacy Monitor from an Old LCD

Unfortunately, about 99.99999% of the world's population are not Sergey Brin and cannot boast they're wearing Google Glasses. Nevertheless, you do... 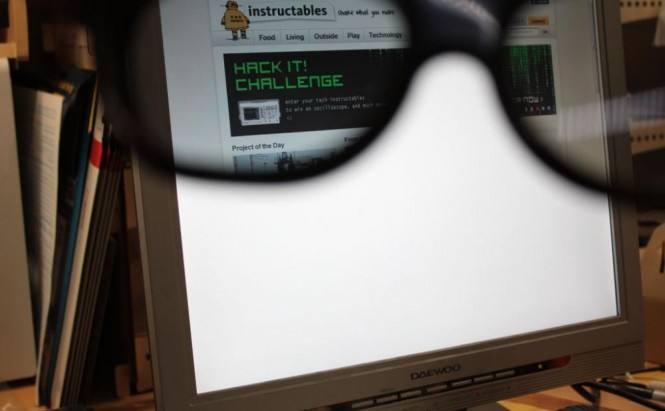 How to: Make a Privacy Monitor from an Old LCD

Unfortunately, about 99.99999% of the world's population are not Sergey Brin and cannot boast they're wearing Google Glasses. Nevertheless, you do have a chance to augment your own reality: all you need is a glass rim, an old LCD monitor, and a bit of patience. Put all these ingredients in the pot, and you'll get a great James Bond-like 'privacy monitor', which will appear blank to everybody but you.

How Does It Work?

In most LCD monitors, the glass screen are usually covered with two films: an anti-glare one, which is of no concern for making hacker glasses, and a crucially important polarized one (alias 'polarization filter'). The latter is needed for filtering the light beaming from inside the monitor so that it makes sense for our eyes. If you remove this polarization filter, the only thing you'll get will be an absolutely blank white screen.

However, it doesn't mean your monitor has been irreparably damaged and belongs to the junkyard. If you put the polarization filter before your eyes – magic, magic! – you'll see the picture again! This gives some food for thought, doesn't it?

1. First take an old monitor that you don't need that much anymore and take it apart by unscrewing its back panel. Unscrew the Back Panel

2. Take a razor-sharp knife (well, a straight razor will also do) and cut the films off the screen at their edges. In some monitors, they are not glued to the glass screen, so you can peel them off straight away. The polarized film should be treated with extreme care; you should mind its edge and side orientation because if you hold it wrong, you can screw up the glasses. The anti-glare film below the polarized one, on the contrary, can land in your trash bin without further ado. Peel Off the Filters

3. Remove the remains of the glue from your monitor. The easiest way to do it is to use a paint thinner or some other solvent. Make sure you don't apply the solvent on the plastic frame of the monitor. According to dimovi, the author of the idea, it is best done by putting solvent-soaked paper towels onto the monitor. If you don't have the courage to chemicals, you can always scrape off the paint with a piece of wood or metal. 4. The next step is to cut the lenses out of the polarization filter. You can use the native lenses for you glasses, using the rim as the template. Dimovi recommends implementing the laser cut, which is actually what he earns his living with. Put directly, we believe there are many more ways to cut the lens shape you need without using any sophisticated scanning and shape techniques. Anyway, if you think dimovi is right then you should better turn to professional laser cutters. Cut the Lenses from the Polarization Filter

5. Insert the finished lenses into the rim. That's it! However, don't forget nobody will see anything on you monitor screen unless they wear your magic glasses. So, don't get surprised if your friends think you went crazy when they'll see you sitting and typing in front of an absolutely white monitor for hours.

What else could you do with your old monitor?

Wow that's pretty cool and pretty surprising that it has not been used before. The question is how many different outcomes you can see by simply changing the polarisation of the glasses? Sounds a bit simple, but I just thought of that:
If we can change the polarization of the glasses will we be able to change the content of the screen?
Maybe we'll have 2 possible images on one screen (a bit lake polarize window can shut or allow light depending on the polarization of the window)
We could have graphic coded in a dual concept that shows 2* or multiple different images from one screen, all you need is the right glasses.
The reason I try so hard to get this point across is that I would love to buy some "Playboy" glasses while my wife has "Cosmopolitan (magazine)" glasses and when we walk down the street she sees cosmo ads all over while I see playboy ads on the same ad spot...