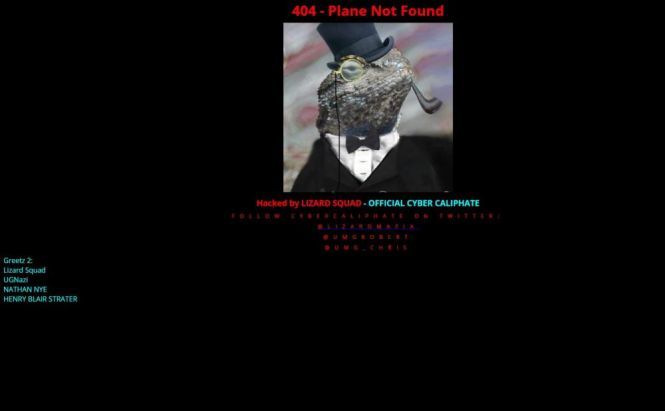 On Monday morning, the official Malaysia Airlines website was attacked by the hacker group Lizard Squad claiming to support the Islamic State. The service's main page was replaced with an image of a flying aircraft and a message saying '404 - Plane Not Found' and 'Hacked by Lizard Squad — Official Cyber Caliphate'. Later, at about 10:30 a.m. the aircraft picture was changed to the one with a lizard wearing a tuxedo and top hat on a black background.

The Lizard Squad group made headlines last year for hacking Sony's online PlayStation network and Microsoft's Xbox site on Christmas day. And in August, they also tweeted to American Airlines about possible explosives on the plane carrying the president of Sony Online Entertainment.

As for today's issue with Malaysia Airlines, the company heatedly denies the attack and posted the following message on its Facebook page after the system had been recovered: 'Malaysia Airlines assures customers and clients that its website was not hacked and this temporary glitch does not affect their bookings and that user data remains secured'.