When you hear a word 'troll' with respect to Internet, don't get fascinated. There's few once-in-a-lifetime opportunity to experience a hearty... 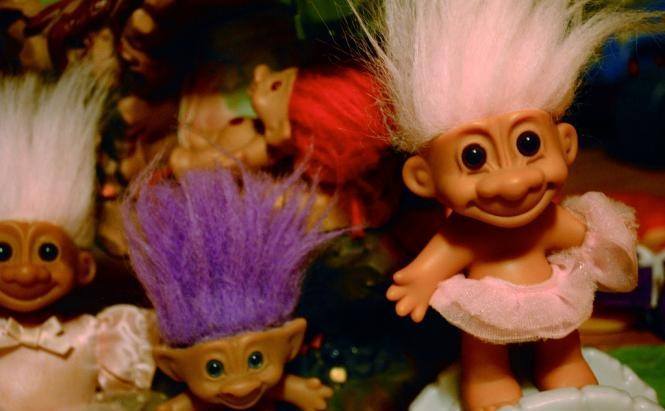 When you hear a word 'troll' with respect to Internet, don't get fascinated. There's few once-in-a-lifetime opportunity to experience a hearty welcome of an imaginary being 'troll'. However, an Internet troll has a lot to do with a Scandinavian mythological creature, famous for its severe temper. Be sure web trolls' disposition is as sullen and difficult as that of their folklore prototypes.

Perhaps, you'll be interested to find out that the modern meaning of the word 'trolling' (that appeared roughly in 1980-1990s) comes from a French word, meaning way of fishing. Here you are, the principle is just the same: trolls like fishermen make use of baits to lure poor users like fish.

How does it work?

The trolls' sole aim seems to to provoke users' strong emotional reaction by posting igniting or irrelevant messages in the World Wide Web. The strategy as simple as ABC: they post, let's ironically call it, 'a message of happiness' on forums or in social networks and wait around looking forward impatiently to getting a knee-jerk response.

Trolls are simply vampire lookalikes so it's no wonder that shattering your nerves is an indescribable everlasting joy for them. Wanna be upset? Disrupted? Insulted? Just find a troll, and he'll do the rest.

Having made mischief, a troll can look indifferently and say with an air of nonchalance: 'I did it just for the lulz'. Lulz is regarded as laughter at someone who is a victim of trolling that indicates an immense joy of making somebody feel ill. Lulz, I'm a cool guy, I've made her cry.

At a stretch, trolling can be considered somewhat of moral terrorism targeted at playing tricks on people's self-evaluation. Actually, the trolls a sorry sight. Most of them are just unhappy people with unsatisfied demands. Stalking you, trolls simply try to assert themselves. All they need is your reaction. It's like a breath of fresh air for them.

Now you're acquainted with trolls. With a quiet conscience, I understand that you're able to oppose their desperate attempts to spoil your mood, but here goes a lurking danger: being so smart in this field now, don't mix up trolling with constructive criticism. And don't forget: there's always a chance you are facing an idiot and no troll. Always keep that in mind.

Here are a couple of key signs to distinguish the trolling posts from the non-trolling ones. The possible symptoms of a trolls' message are

2. authors' chase after attention (please, stay with us)

3. offensive comments with a lack of arguments, ungrounded criticism, you stupid idiots!

4. A CAPS LOCK MESSAGE (some may think that it attracts more attention, but they are mistaken)

5. off-topic ideas (by the way, I saw a cool skirt at the mall the other day).

Now try to detect which comment is trolling and which is not.

1. “God, you're dumb! Everything you are writing here is a whole lot of nonsense. No one will never read it because you're an idiot”.

2. “I can hardly name the story written in a proper way. There's a pile of misprints and grammar mistakes. I think the story would be really better if you corrected the mistakes”.

I hope, you've got the message and understood who's who.

It's interesting that trolls are likely to be divided into 5 main groups according to the amount of harm they make:

1. Playtime trolls. They are not genuine trolls. They simply play pranks and have fun. The trolls of this type are easily distinguishable because of its evident provocation. Take them easy.

2. Tactical trolls are noted for their cunning temper. They tend to worm themselves into one's confidence and strike a blow. Don't bother a lot.

3. Strategic trolls are dangerous trolls. It should be noted, that they're able to create a special team and work out a long-time trolling plan. Be on the alert.

4. Domination trolls are serious people, somewhat of the mafia. They appear to develop hierarchical structures of trolling. Phone 911.

5. Psycho-trolls are handicapped people who do enjoy the process of insulting other people. Never mind.

In general, trolls are harmless. The most they can do is to leave a nasty taste in your mouth. That's it.

To stop fraying your nerves, we pass you on four golden rules. The rule of the thumb goes like this: don't feed the troll. I hope the phrase doesn't speak in riddles. So! To avoid trolling:

1. keep your strong emotional impact only for your darlings

3. don't give personal information to the people you don't know well on the Web

4. complain to the listmaster. Lay the blame on them :)

Your emotional response is a healthy nutrition for a troll. So be greedy and keep your fats with you: don't feed the troll, lulz!

Talking about trolls, I can't but mention this one. This Leprechaun (Irish troll) doll has become one of the most creative toys of the 20th century and still remains popular among people of all ages in the English-speaking world. Many of you are sure to be acquainted with this sweetheart character from childhood on this article's main picture.

Well, at least this trolls can provoke nothing but pleasant reminiscences :)

Previous story Google Ranking Hints Next story Why does Apple Employ the Chinese?

I love the way the author structures her articles! All is clear as day! Respect! Marisa, you do not give the chance to drop the article in the middle of it. To speak the truth, I didn't know that there is even a special term 'trolling' for this type of activity. Facing such compromising phrases in various forums on the net, I just couldn't make up my mind, who are these dump people, writing these dirty messages and why they are so indifferent to the topic discussed

Now I'm fully armed, thanks to your article

Alexandra, I'm really glad that you've found forces to read it to the end and considered it useful a bit. Many thanks!

I like the way the author structures her articles! All is clear and simple! Respect! Marisa, you do not give the chance to drop the article in the middle of it. To speak the truth, I didn't know that there is even a special term 'trolling' for this type of activity. Facing such compromising phrases in various forums on the net, I just couldn't make up my mind, who are these dump people, writing these dirty messages and why they are so indifferent to the topic discussed

Now I'm fully armed, thanks to your article

Well trolls feed on argumentative subjects like religion, so If you see any on a forum or on fb, just ignore them and warn the others.

I entirely agree with you! It's much better to save your emotions up for your beloved. Don't feed the troll, in other words

I think that the trolls are not only unhappy, but simply sick people who need help of psychologists. So I doubt that they are easily distinguished from idiots. How on earth is it possible to find any difference between an idiot and a troll!

Lol, are you trolling now?

The difference is that a troll can be smart, indeed.