White House Asks YouTube to Take Down the Controversial Video

YouTube has been dragged into the big politics as White House pressured it over the controversial anti-Islamic video. The almost-14-minute-long... 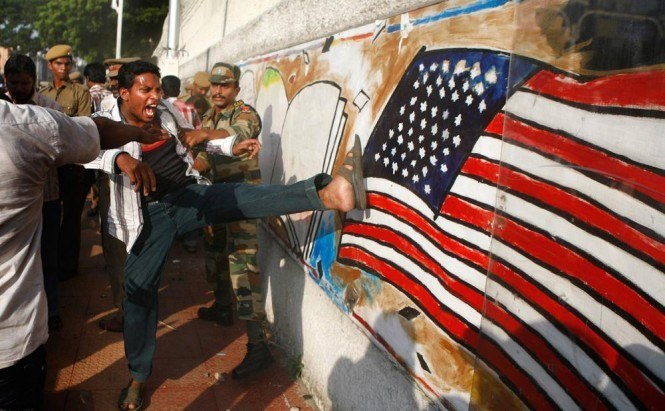 White House Asks YouTube to Take Down the Controversial Video

YouTube has been dragged into the big politics as White House pressured it over the controversial anti-Islamic video. The almost-14-minute-long amateur video criticizing the Muslim religion and the prophet Mohammed has been the reason for vehement protest and bursts of violence all over the Arab world. The outrage peaked in Lybia, where the angry demonstrators killed four American embassy workers, including the U.S. Ambassador for Lybia.

Tommy Vietor, the spokesman for the National Security Council, acknowledged in his talk with the Washington Times that the White House "reached out to YouTube to call the video to their attention and ask them to review whether it violates their terms of use." Put plainly, the White House has thoroughly recommended Google to take down the video, even if the clip doesn't violate any of the YouTube community guidelines.

So far, YouTube's reaction was the outright refusal to yield to the governmental pressure. The largest video portal in the world said the following (as cited by Cnet):

"We work hard to create a community everyone can enjoy and which also enables people to express different opinions. This can be a challenge because what's OK in one country can be offensive elsewhere. This video - which is widely available on the Web - is clearly within our guidelines and so will stay on YouTube. However, we've restricted access to it in countries where it is illegal such as India and Indonesia as well as in Libya and Egypt given the very sensitive situations in these two countries. This approach is entirely consistent with principles we first laid out in 2007."

However, YouTube has taken a Solomonic solution and blocked the access to the video in the countries where it can be regarded as illegal. The said countries include India and Indonesia; and Afghanistan reacted to the controversy pro-actively, banning YouTube within its borders. The Google-owned video service has also made the video unavailable for Egypt and Lybia, the two countries where it sparked up the most massive protests.

Possible consequences of that takedown controversy can possibly affect the current YouTube community guidelines. Now, any sign of a naked or merely indecently exposed female breast on YouTube immediately results in a video blockage, whereas a clip that has led to deaths of at least four people and offended millions of Muslims all over the globe is still there.

On the other hand, a question arises as to how often the U.S. Government exerts pressure of this kind over Silicon Valley. Adam Thierer, a senior research fellow at George Mason University's Mercatus Center, has already called this approach "censorship through intimidation." A number of other civil right activists have also expressed their concerns about the state pressing the media in order to get rid of the controversial contents. The fact, frequency and scale of any previous state intervention into IT content policies remain unknown.

Update: A number of media in post-Soviet countries have reported that if the video is classified as extremist by the Russian court, the access to YouTube can be blocked for all Russian IP addresses.

Do you believe the controversial anti-Islam video should be taken down worldwide?

No. Muslims are satanists and worst case infidels. The video simply reveals the exact identity of Islam. Any religion that denigrates the sanctity of human lives should be persecuted and not pampered. Islam is synonimous to violence, hatred, superiority complex and highest level of intolerance. Any religion that despises knowledge, learning, seeking the truth and advancement is satanic; that is what Islam is

I think that they are too aggressive. There are a lot of videos and films and songs that in this or that way ridicule other nations. But nobody breaks out a war because of it.

No, everyone has the right to say their view about anything they wish, why are Muslim always different? What are they feeling guilty in the Video? Why are they feeling as if the video was right about them. If Muslims don't question their own fate they won't react that way. Why do they have to be so violent all the time, maybe they don't even trust what they believe in?

Certainly, as Muslims we never disrespect any pious man and these pseudo-intellectuals and infidels call it freedom of opinion... Damn it.

The asnwer is controversial, as well. On the one hand, YouTube may regard the video as a religious hatrid and ban it. But, on the other hand, the movie can be considered as a piece of the news blog that lights up what happens in the world.

Remember when Julian Assange was attacked by United State for expressing the so called freedom of speech,America aske pay-pal to block donors from donating to wiki leaks and they did i wonder why Youtube wouldn't do the same as this will bring severe problem to western world than the benefit of leaving it

I see no need for it to be on the web personally, as it was obviously meant to create discord and offense. The video is causing more problems than not, and is not winning us any support or sympaty overseas as long as it is in existance on you tube.

No, How do we act when they burn our flag or speak over the loudspeakers with their call to prayer, "Death to the Americans,,We will send them home in a box". I have lived there with these people, and I know them. We should however retaliate with the full isolation of Liba and any other nation that would dare to kill a United States citizen Or openly protest against the US. Obviously they are not our friend. Deal with them quickly, including force if necessary to protect our citizens. The immediate stopping of any direct or indirect aid of any sort, to that country from the US for a minimum of 5 years. I am tired of dealing with these people - acting as children and thinking that can get away with anything and still get our handout money and aid. We need to deal with them as though they were adults. If they act with no responsibility toward human life, deal with them at their level. Terribly and swiftly.

No, people have a God given right to express the way we feel, and if you don’t like it, don’t watch it.