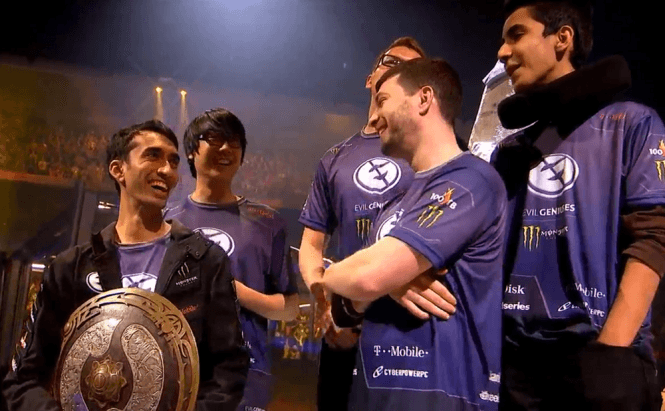 The International 2015, the Dota 2 tournament with the largest prize pool in the entire history of e-sports ($18 million USD) has come to a close this Saturday when the American team Evil Geniuses defeated the Chinese Dota Elite Community team. As a result, the guys from EG (ppd, Fear, Universe, Aui_2000 and SumaiL) took home the Aegis of Champions and the jaw-dropping sum of $6.6 million while the CDEC team had to win only $2.8 million. If these sums sound absolutely insane, I must admit that they are, but they're crowd-sourced as 25% of the money gathered from tickets (Compendiums) goes into the prize-pool, so it just means that this game has very many fans.

The final itself was pretty awesome with some hard fought games and a roaring crowd chanting "USA, USA" (which wasn't actually a huge surprise since the main event took place in the KeyArena at Seattle Center). In truth, EG were always one of the favorites to win the whole thing, but CDEC's Cinderella story surprised everyone. The team originally started as LGD second (youth) team, wasn't invited to the tournament and had to enter as a wildcard by winning the Asian qualifiers, so it was seen by everyone as one of the most likely teams to go home first. They proved everybody wrong by completely dismantling their opposition, not losing a single game in the main event until the grand finals (even beating EG 2-0 in a previous encounter, sending them to the lower brackets). And, of course, since last year's TI brought us Techies, this year's tournament also had to come with a surprise which was revealed in the All Star Game. In the past editions, the game featured the players who got most votes from the community, in a traditional 5 on 5 battle. This time, Valve introduced a 10 on 10 mode and the two team captains picked 10 random (with one exception) people from the crowd to come and play with their idols. So, starting this week, every Dota 2 mode can now support up to 24 players per game. (Just imagine the chaos!).