Give Android Apps a Go

It is difficult to find a person nowadays who would not have even a simplest mobile phone, and many of us use iPhones and premium Android... 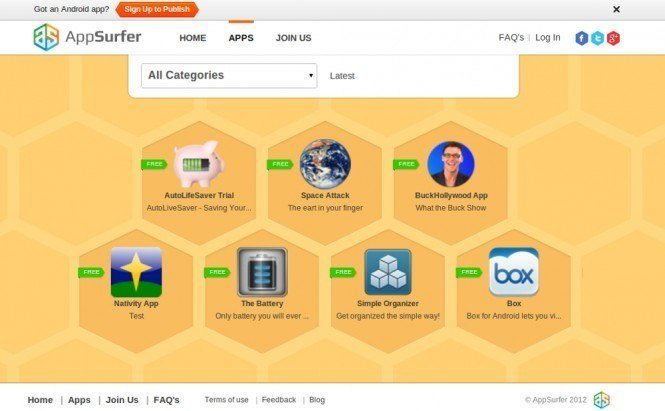 Give Android Apps a Go

It is difficult to find a person nowadays who would not have even a simplest mobile phone, and many of us use iPhones and premium Android smartphones. I myself belong to the latter category, and that is why I was especially impressed by the AppSurfer project. You may have heard about it already, probably back when it was still in beta. Now it boasts a rather large library of programs (about 400 in total), and those are divided into two groups: games and applications. The Greeting Page of AppSurfer

What is that project exactly?

AppSurfer resembles two-faced Janus to some extent, with one face toward developers and another toward users. Developers are encouraged to post their apps there (the only prerequisite being that their applications should be on Google Play, as some information is taken from there). As a result, this gives them some publicity and consequently, maybe, some bit of success. If you are interested in how this works, take a look at the other side. The project allows regular users not only to access and run Android apps from any web browser on any type of devices (yes, it is possible to run the service even in a browser on your Android smartphone, resulting in a dubiously useful Android-in-Android kind of contraption): you can share your favorite applications with your friends by tweeting, liking, or Google-plussing it, as well as access its page on Google Play Market. Depending on which device you use, the look of the service will change a bit. In a computer browser you will see the interface like on the screenshot below and operate the screen of the virtual device with your mouse. In a phone browser, first you will have a similar interface, but then the application will run in full screen, making for a more authentic experience. Being a regular user myself, I was pleasantly surprised to find out that AppSurfer supports GPS, phone rotation, single and double taps, audio output, and dragging (you can also read that the developers are going to add camera support and audio input shortly). Unfortunately, you won't be able to try out those apps that require an accelerometer or multitouch to work: these features are not supported by AppSurfer.

I tested several apps, and my results were rather divergent. Sometimes applications told me that the connection to the server can't be established, sometimes they would run terribly slow for no apparent reason (other times, the same apps would run normally). One more thing disappointed me a little bit: all the apps I tried were completely silent, even though I was sure that they do have sound in them (like e.g. Angry Birds); also, the screen of the device didn't want to scroll, even though this was required by the app. Maybe I was just unlucky; I hope your experience will be better. Notwithstanding the minor disadvantages, I'm sure that this service will turn out extremely useful: first of all, you can find out if there are any adverts in the application you want to install or if it behaves in some weird way. And then, even with the lagging, it is possible to get the idea of an app and decide whether you want to buy it or not: the allotted 10-minute period for testing each app is quite enough. It certainly beats making purchase decisions based on comments on Google Play.

Yes, there's no denying that AppSurfer is far from being perfect, but the project is young and is rapidly moving forward. Wherever and for whatever purpose this technology may be used later, I think it will go very far.

Which Android application are you looking forward to trying out?

The project is outstanding! It is exactly what should have been launched.