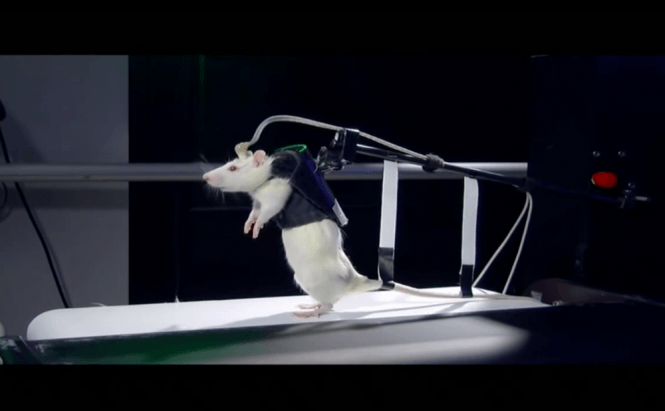 A team of Swiss scientists have managed to make paralyzed lab rats walk and even climb stairs with the help of electronic signals. The human clinical trials are due to start in 2015, but so far things have been looking incredibly promising.

The Swiss researchers from EPFL (Ecole Polytechnique Fédérale de Lausanne) came up with the NEUWalk project which is focused on giving people with Parkinson's disease and spinal cord injuries the possibility to move again. This experiment doesn't aim to provide a cure but tries to dramatically improve the quality of life to people with paraplegia by creating a spinal neuroprosthetic system.

The research was done with lab rats that had their spinal cord severed, so that the brain waves weren't able to reach their lower body. The researchers injected a drug into the rat's spinal chord and built a robotic part designed to sustain the mouse in the standing position and follow it in its movements (the same way you would sustain a baby during its first steps). Then they implanted flexible electrodes into the upper and lower part of the severed spinal chord in order to send painless electrical stimuli to obtain voluntary locomotion.

Besides determining that the height at which the legs are raised is directly related to the frequency of the electrical stimulation which allowed to help the mouse overcome obstacles such as stairs, the scientists also discovered that even after a severe injury, the plasticity and recovery of the spinal cord are still possible, but only if the dormant spinal column is awoken first.

If you want to find out more about the study, you can find all the information and video presentations on NEUWalk's webpage.