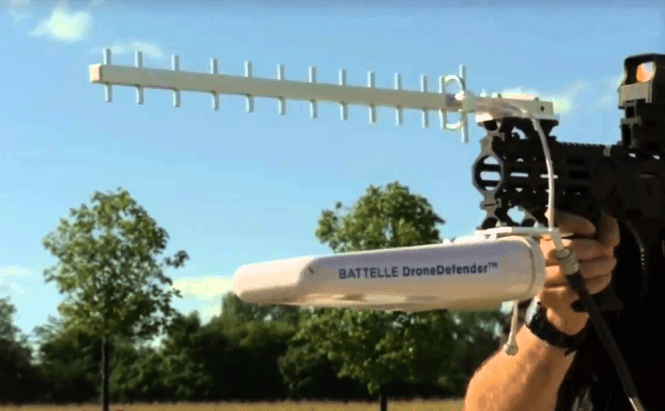 Drones are some pretty awesome inventions that anyone can have and play around with, but, unfortunately, that could also bring a lot of trouble. I'm not sure if you've seen the news at the time, but a football (soccer) European Qualifier match between Serbia and Albania was stopped last year after a drone flew the Greater Albania flag over the pitch. That particular drone sparked numerous violent incidents between players and spectators alike as it couldn't be taken down in time. Soon, law enforcement forces will no longer have to deal with this problem as Battelle Innovations created a shoulder mounted gun, which can force UAVs to land or return to their point of origin.

Named the "DroneDefender", this prototype uses radio signals to hijack the drone's controls, interrupting the communication between the device and its original owner. The rifle has a range of 400 meters, is very light (weighing less than 10 lbs), can fire 0.1 seconds after being started up and is capable of functioning for 5 hours without interruptions. Since the weapon terminates all communications between the drone and its owner, it is also capable of stopping detonations or any other kind of other potentially harmful remote commands.

The DroneDefender will be fully ready in 2016 when it will be sold to a wide number of US and overseas government agencies. Since the weapon operates on radio frequencies forbidden to civilians, it will not be available for consumer use. (Probably, the fact that it is only sold to government agencies is also the reason why the device is shaped like a rifle.)