Let's take one more look at the year that is behind us to see how many virtual people we shot in the face and felt a bit of old-fashioned serenity afterwards. 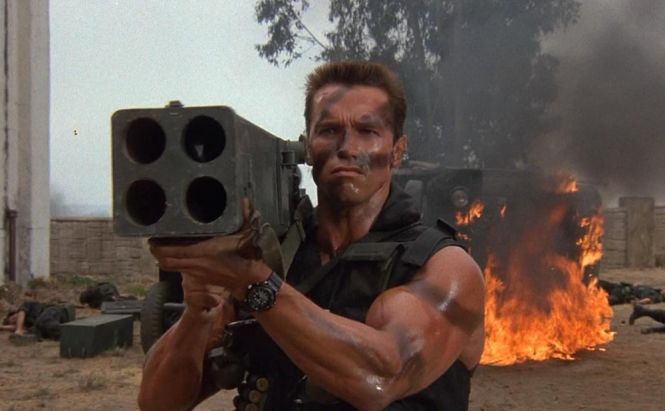 The year 2015 has faded away, and it's time to remember its best moments, namely, all the times you shot someone in the face in a video game. Action games have been in decline lately, with the throne being occupied by Call of Duty . But 2015 had some nice additions to the genre. However, we should all remember that genres as we know them are slowly mering and disappearing, so it's not as easy to distinguish pure action from a “hybrid”. With that in mind, let's take a look at the last year's contribution to the genre.

Words are not enough to describe the grandeur of MGS V. It's the final installment in a franchise so legendary it remembers USSR. The final chapter in the story of Big Boss lets you experience dozens of military operations around the world, engage in adrenaline-fueled fights, experience a tear-jerking story and ship people to the home base by strapping them to air balloons. Yep, it's Hideo Kojima's deadpan humor all over again.

The Phantom Pain is the biggest most stable game in the series, finally putting more emphasis on gameplay and ditching hour-long cutscenes. Some like it, orthodox fans are ambiguous, but one thing is certain: it's the perfect farewell to Metal Gear.

After the releaseKonami fired the series' creator, but the future of the franchise is still uncertain. Let's see if 2016 clears things up.

Rise of the Tomb Rider

The 2013 reboot of the legendary series was a nice action-survival adventure with the queen of action games Lara Croft trading her trademark pistols for a bow and arrow. The game was a nice thrilling adventure, a moderate success and warranted a sequel. In 2015, the sequel had Lara travel to Siberia to kill even more bad guys, solve more puzzles and become even more of a hardass survivor discovering supernatural mysteries. I don't know why the writers want to torture Lara with PTSD, but the game felt like a Nolan sequel to Batman in the world of gaming: more serious, more polished, more acclaimed. This time the game goes into the RPG territory, adding a day and night system, behaviors of animals and a crafting system. There's even more emphasis on stealth and environmental attacks, making the game a very realistic adventure instead of the half-abstract platformer that Tomb Rider used to be. It's a good game, if only not very similar to the classics. But hey, you can shoot wolves in the face – with arrows.

Assassin's Creed franchise started as a great concept, but went through a lot of growing up to become as big as it is. The first game was fresh in ideas, but monotonous in execution, the second was a smash hit, and then the conveyor belt of sequels and spin-offs started working, After mediocre Assassin's Creed III and buggy as hell Unity, Syndicate feels like the first really great game in the series. Maybe I'm biased, but Victorian London looks much better than Jerusalem or Venice, and the adventures of the assassin relatives feel more personal, more fleshed out and more competent in terms of design. There's the traditional historical fanservice, like having Karl Marx, of all people, as a sidekick, engaging combat and thrilling stealth. It's what Assassin's Creed is supposed to be. Open world is not my favorite kind of setting, but the game has a good linear story with set goals to accomplish, so there's no reason to complain. Cohesive side missions are also interesting and give the right impression that the world of Syndicate is really alive and big. Having two characters with different strengths and skills helps in this regard as well.

Assassin's Creed: Syndicate is the best game in the franchise yet, so it's worth playing even if you haven't been a fan. After all, no one can stab people quite as stylishly as a member of the ancient order of Assassins. Or punch. Or kick to the groin, while playing as a lady. Or stab again, in the back. It's all good, wholesome fun, really.

Speaking of open world games, does anyone remember the first two Just Cause games? They were actually among the first really open-world action games, combining the diversity of GTA with the exotic setting of Far Cry. The franchise's main selling point was the mayhem you could engage in while running around the jungle and – what else? - shooting Latin Americans in the face. Both games had fun story campaigns and slick action mechanics. And now we have the third one. Just Cause is bigger, more polished and allows for even more mayhem. The perfect sequel, really. The protagonist Rico can turn a Mediterranean island upside down in real time, traveling across five unique regions, shooting, blowing up and exterminating all life in his way. Travel is fast and comfortable, so the game never gets boring. The parachute and the grappling hook make a comeback, as well as tons of pistols, rifles, RPGs, fighter aircrafts, helicopters, and many more toys to play with.

Just Cause 3 is an open-world action done right. It submits to the rule of cool completely and wins our hearts because of it. Even if the story is lacking, you can get your money's worth by blowing stuff up and flying around.

In contrast to the fun loving Just Cause, the new Rainbow Six is as serious as it gets. This is the game where the developers tried to shake off all the flaws the series had for the last decade. It's strictly a tactical puzzle with a gun. Once again, you control a unit of Special Forces fighters, all with their own perks, skills and advantages, equip them with weapons and gadgets, including guns, grenades, tools and even drones, and send them on missions simulating real-life combat situations. Police brutality is back in style!

This time, Rainbow Six is back to its roots. It's a hardcore, but competent action with emphasis on tactical thinking. That doesn't mean it's mundane or boring, however. The game includes advanced destruction mechanics, such as the ability to breach doors, floors and ceilings. Environments and maps are very detailed and provide great potential for intelligent action fun.

My only point of criticism is that the game has no story campaign. I mean, none. Looks like the decision to focus on the series's main selling point – tactics – meant that it didn't need a story. I can't say I approve, but to each his own. You can still shoot people in the face after hours of careful planning, which makes it even more satisfactory.

Although many call it one of the most disappointing games of the year, the new battlefront manages to capture the magic of its predecessors, even if there's little of it left with the lack of content. Large maps modeled after iconic Star Wars locations, epic battles, various classes with unique sets of skills – all this makes Battlefront a cool engaging action game. Good, good! Let the DLC flow through your wallet!

There is, once again, a non-existent story mode, visceral gameplay with blaster shooting and lightsaber-swinging. DICE delivers the feel of the battle: sound design, physics, dynamics and balance are near perfect... well, most of the time.

I guess that during 2016 the game will get more content via DLC, even though it's not the best strategy. Then it can get more praise. But even now it's one of the best games where you can shoot a stormtrooper in the face and laugh about it with your friends online. Or force-choke the poor guy pretending it's Finn from Episode VII.

Of course, there are many games that can be called action, such as Hotline Miami 2, Broforce, Battlefield: Hardline, Evolve, Mad Max, Arkham Knight and others. But those are either too low-budget, too disappointing or not that interesting to be considered the year's best most famous blockbusters. Still, it's nice to see action galore, since it gets boring sometimes to play even the best RPGs.