Let's take a short look back at some of the more infamous big game releases from the last year and hope that 2016 will have developers learn from their mistakes and make us happy. 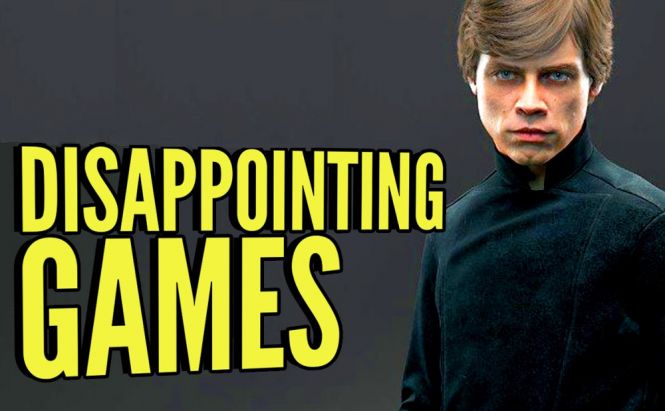 2015 was both a good and a bad year for games. While low-budget independent gems rose to prominence, blockbusters felt rather disappointing almost every time. Maybe it's because the industry is in a crisis, maybe it's just gamers becoming more and more jaded with expectations that are impossible to meet. Either way, there have been major disappointments, and here are the biggest of them.

This online juggernaut was supposed to bring the Star Wars MMO action series back to its glory days of the mid-2000s. It seemed to have everything: updated graphics, visceral gameplay, nostalgic content and, overall, all it took to make a great game in the vein of its predecessors. However, upon release, the buyers found the game... lacking. In all aspects: the atmosphere was barely there in generic online battles, the single-player story campaign was virtually non-existent, and available game modes feel lazy. Basically, the impression is that the game was made as a skeleton for future DLCs, which is aggravating to many people, but inevitable. Despite all these shortcomings, Battlefront is a very competent action, with beautiful visuals and engaging combat. With time, it will probably get better, as more and more content will be added while the game serves its purpose as the first of many additions to the Star Wars gaming library, following in the footsteps of many acclaimed games. This may annoy some of us, but the Sith Lords of EA know how to make a long-lasting product.

It's quite obvious that, by now, the Battlefield formula has been done to death. Generic military shooters, no matter how good in terms of gameplay, are getting old, and while Call of Duty dabbles in Sci-Fi, Battlefield tried to escape the formula by becoming a gaming equivalent of a cop show. The results were less than stellar. Without the military theater of combat and a generic excuse for a plot that allowed you to shoot people in the face while yelling “Go, go, go!”, the action had no set pieces to shine in, and gameplay felt stale, boring and monotonous. The story was laughable and silly, with forgettable characters and the feel of a rejected Fast & Furious script, only without the racing, merged with every generic police procedural ever.
While failing to leave a lasting impression, Hardline was actually pretty good when it came to multiplayer. Several new modes, decent combat and shooting mechanics. It's a solid, but boring game, a failed attempt to find new ground.

Here's a case of a misguided attempt to be smarter than you need to be. Mortal Kombat X was going to bring the classic fighting franchise to a new level, with better story, tons of new content and generally bigger scale than the previous game which was one of the best reboots in gaming history. Cage, you're too old for this

The first mistake was continuing the story without establishing a coherent narrative: time skips, lack of characterization, plot holes and rushed introduction of new characters into canon. Also, making Scorpion human again was a bad idea even without making Johny Cage's daughter the main protagonist of the story mode.

Then there's the gameplay. Trademark gore has become cartoony, fatalities can be bought as a DLC, messy content unlocks, lack of engaging game modes and, last but not least, technical issues, including a horrendous PC port. It almost seemed like the sequel to the Mortal Kombat movie, Annihilation, rushed into production and done so lazily it might as well have killed  the film franchise. The only saving grace of X is a way, way better level of quality, seeing as how for every flaw there's something to actually enjoy. The question is: is the pleasure worth it?

All those little things would not be that bad on their own, but together they spoil the experience of what could have been the best MK yet. Still, most fans will enjoy some parts of the game, and technical issues will probably be solved. However, the reputation of our beloved nostalgic franchise is tarnished once again.

Arkham Knight was supposed to be the triumphant conclusion of the beloved series of games by Rocksteady, the very first genuinely amazing Batman interactive trilogy. Instead, we got a game that didn't offer anything new except for a couple of new gimmicks that didn't require a whole new game to be played. It felt as if the developers had tried to create the perfect Batmobile simulator and forgot to make a real game that would hold up to its predecessors. But it wasn't just the formulaic nature of the game that made gamers angry. It was the PC version, which was so bad it sparked new life in the discussion of PC gaming and reminded us all of the dark age of porting. The outrage was so great that the publisher recalled the game from stores to give it a proper overhaul and at least make it playable. It was later re-released, but technical issues are still present.

It's also worth mentioning that the famous atmosphere that was so good in two previous games has become stale by the third one, and the outright false claim about the plot twist concerning the titular villain's personality has been booed mercilessly. Finally, the return of Mark Hamill didn't make the imaginary Joker feel any less like pandering.

Despite all this, Arkham Knight is a great open world game with top-notch gameplay mechanics, wonderful atmosphere of the Batman universe. It's a worthy conclusion of the storyline and one of the better open-world adventures of this generation. This was inevitable. The fourth installment of the legendary series was controversial long before the release in November. With new gameplay mechanics like fully-voiced main character with a dialogue tree instead of traditional text boxes, a backstory set before the Great Wat, new factions, romanceable companions and the ability to build houses, Fallout 4 was called a betrayal of the series' essence. You have to admit: building fences and micro-managing a settlement aren't exactly the things we associate with an epic post-apocalyptic adventure.
However, the beautiful Boston wasteland, wonderful open world, amazing crafting mechanics and a fresh feeling of adventure still make the game one of the best in 2015. You can genuinely live in the Wasteland, always finding new ways to occupy yourself. What else can serve as the mark of a masterpiece?
It's just that the game is so different from what it used to be. Add to that all traditional weaknesses of Bethesda open-world games, and you have a genuine base-breaker. Some enjoy it more than any previous game in the series, others criticize writing that can feel inferior to the brilliant New Vegas. Then there are some who feel that the franchise should move on and give us something completely different instead of adding new elements to the old formula. Either way, people just can't agree on Fallout 4, the main gaming controversy of 2015.

I cannot stress enough that none of the games in this list are bad. They are simply big games that failed to live up to what is expected of the best. They are all very enjoyable on their own, but could have been so much more.
Let's hope that 2016 brings us more satisfaction and less disappointment.