A recap of 2015 in the world of roleplaying games. 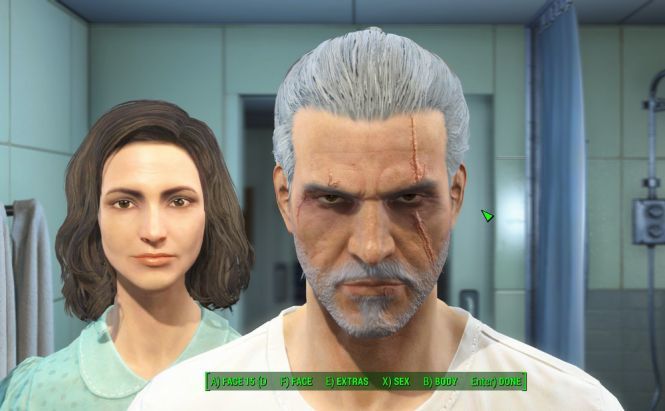 Well, folks, 2015 is almost over, and boy, was it a great year for roleplaying video games! We've had new entries into blockbuster franchises and newcomers that gave us pleasure, surprised us, made us laugh and cry. Controversies have been discussed, pleasant surprises admired.

In this article I decided not to focus on minor independent releases, because they are too niche and deserve a little article of their own, covering some of the most interesting Kikcstarter-backed releases. But right now, let's remember the heaviest, meanest and coolest big-name RPGs of 2015.

The fourth game in the legendary franchise is many things: a blockbuster, an object of ardent criticism and high praise. It's both more complex and more primitive than its predecessors, with the Mass Effect-like dialogue system replacing traditional complex dialogue trees dependent on skills and stats, and the superb crafting and modification system allowing for unprecedented level of customization. Atmosphere of the Boston Wasteland, however, is as striking and interesting as Washington of Mojave, and content is plentiful, well-made and atmospheric. This time, war DID change

The story is decently fleshed-out, with various fractions, both old and new, struggling to survive in a post-nuclear world. Despite lacking some of the depth found in more story-driven RPGS, Fallout 4 is probably the pinnacle of open-world environment building. There's nothing quite like traveling across the land killing raiders, running like hell from Deathclaws all the while listening to classic American “Atom Bomb Baby” straight from the 1950s. And at the end of the road your own personally-built house in a protected settlement is there somewhere, with friends, lovers and a dog waiting to make you feel at home. It's a game of mood and atmosphere, submersion into the world that is both terrifying and alluring.

This Polish phenomenon is crowned by some the best RPG of the year over Fallout 4, and for good reason. Andrzej Sapkowski's dark and epic saga seems to be making it big, with the game series' success staring talks of a Hollywood movie, and the original books receiving proper translation. This game, the final chapter of the trilogy, shows us exactly why The Witcher is so popular now. It's dark, it's deep and it's extremely well-written. Geralt's journey is finally over

All the flaws of Fallout are advantages here. Every quest is tailor-made and personal, every line of dialogue feels lifted straight from the literary source. However, this game can feel monotonous if you decide to fully commit to the work of a witcher and slay all the special monsters. Yet, with the amazing story and characters, freedom of choice and exploration, near flawless combat system and developer support that makes you fall in love with CD Projekt RED, Wild Huntis a heartthrob of a game that earned love and respect of millions around the world.

The Polish developers are promising that 2016 will see more content for the game, so that their best project yet could be remembered as the triumphant end of the series that launched them to stardom. Whether there will be more games in the franchise focusing on other characters instead of the witcher Geralt remains unclear.

While Fallout and The Witcher are big, epic modern RPGs, the A-listers of gaming, Pillars of Eternity is a lot more modest. It started as a Kickstarter project back in 2012, when Obsidian, a nerd-favorite developer, was facing bankruptcy and shutting down. They came straight to the audience and offered to make a classic isometric RPG in the same vein as Baldur's Gate and Planescape: Torment. The response was overwhelming: all stretch goals were reached within hours, and the game became a record-breaker. Demand for classics turned out to be greater than anticipated, and a small, but strong RPG was born. Pillars of Eternity is a party-based story-driven adventure modeled after D&D cult hits, merging the rich mechanics of Icewind Dale and thick characterization of early Bioware masterpieces. Yes, you can be a Kung Fu monk in this

PoE is made in pseudo 2D and looks downright gorgeous reminding players both of matte paintings and hand-drawn environments of the olden days. Rich roleplaying system with a variety of specializations, unique races and intricate mechanics allow for an experience that brings you back to the time when video games were young, and you were even younger. Mature and sophisticated plot keeps you on your toes, quests lure you into discovering new secrets of the original world, and characters make you fell like you're not alone in this bizarre adventure.

Pillars of Eternity can actually be the culmination of old-school gaming nostalgia, since others are yet to surpass the sheer quality of this particular product. This game proves than not only are games like that good for nostalgic reasons, but for being amazing even today, in the era of Call of Duty and Mass Effect.

Another Kicksatarter miracle standing apart from its lesser brethren, Shadowrun: Hong Kongis a semi-sequel to the first successfully-funded classic send-off Shadowrun Returns and its add-on Dragonfall. It's also a simple-looking isometric turn-based RPG with a lot of text. But this time it's twice as good and three times as big. This game takes the best aspects of the original and builds upon them to finally provide the experience Shadowrun fans wanted. This time, the player is put into a bustling, gritty and beautiful environment of Hong Kong, thrown right in the middle of a decades-long conflict between a man trying to make things right and a corporation feeding on the rotting body of the Walled City. Storyline and quests feel more personal than ever, characters are well-written, dialogues are rich and the combat system is perfected from the previous incarnations of the Kickstarter generation of Shadowrun. Of course, it's a bit short, but this is to be expected of a game that has less than half the budget of Pillars of Eternity. It's a cheap, tight and engaging adventure that will make you appreciate the couple of evenings you spend on it.

This game is the last on my list not because I have a prejudice against PlayStation, but because I don't like the super-difficult super-complex combat grinder sub-genre that Bloodborne is the epitome of. But credit where credit is due: Bloodborne is a beautiful hack & slash sweatfest where you die a lot and spill tons and tons of the precious vitae. The game is made in the mold of Dark Souls and Dark Souls 2, but with a bigger budget allowing for a more commercial mainstream appeal. This is probably the bloodiest game of the year as well

The game has a beautiful Victorian Gothic setting, big fat bosses and an obscure storyline you have to try and discover by exploring well-designed locations. The combat is fast and visceral, in-game models and levels are marvelous to look at, and the overall experience is almost cathartic. Even the poor choice of killing tools doesn't spoil it. So, despite my reaction to dying a lot, Bloodborne is genuinely awesome.

Those are my favorites of 2015. There are many others, of course, but these five are the must-plays in my book. They gave me more pleasure than the DLC for Dragon Age: Inquisition or small-time gems like Dex. The next year will bring us even more RPG awesomness, with the new Deus Ex, Mass Effect and several unannounced IPs. If you ask me, I'm still waiting for the Star Wars game suggested by Obsidian. But that's just the nerdness talking. Let's wait and see what the future brings.