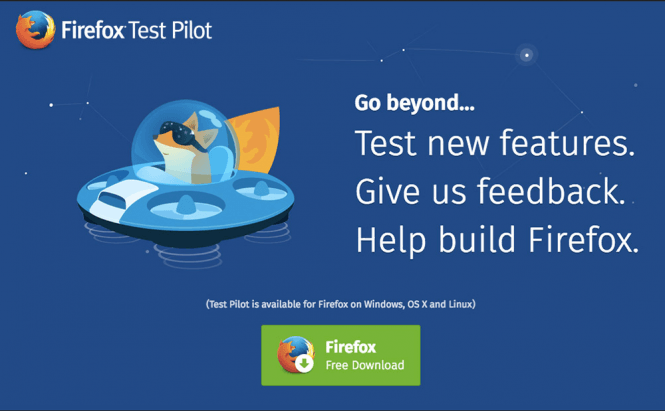 If you've always wanted to try out Firefox's newest features, but didn't like having to use the beta version of the browser, Mozilla might have just come up with the perfect solution for you. A new add-on called "Test Pilot" will allow the users to install and test out the latest features directly in the mainstream version of Firefox. Those interested can already check out Test Pilot for themselves; all they will need is a Firefox account and, of course, the latest version of the browser.

As you might already know, the beta version of Firefox, the one where all the cutting-edge features are being tested out before being introduced to the regular users, gives you access to all the new stuff, but it's also quite unstable, so you can't really use it as your main browser. However, if Mozilla allowed its users to install untested functions and features on Firefox, it would have probably received tons of questions and complaints from those whose browsers stopped working properly. This is why Test Pilot is such a cool thing: it allows you to check out the newest (still experimental) features on a stable version of Firefox while also eliminating the risk that you might accidentally break your browser.

Currently, those who choose to sign up for the Test Pilot add-on will get to play around with three new features. The first one, "Tab Center", is a function that Opera already offers, which allows you to put your tabs in the left-side of the window instead of on the top. The second is called "Activity Stream" and it combines your recent history and bookmarks with images from those websites. Lastly, there's a feature called "Universal Search", which will offer enhanced site recommendations as you type into the address bar. According to the official announcement, Mozilla doesn't plan to make more than six experimental features available at the same time through the Test Pilot program. If you're interested in checking out Test Pilot for yourself, all you need to do is to follow the instructions from its official webpage.

Since we're already talking about browsers, you might also want to read some of our previous articles such as: "Browsers for children" or "Best anonymous browsers".