Mozilla Adds Something New to Firefox

Latest Firefox 10 released on February 10 brings some new built-in tools for web developers, as well as the improved Firefox Add-on... 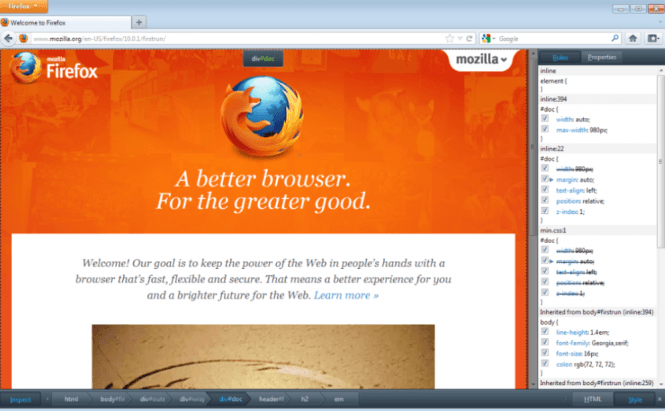 Mozilla Adds Something New to Firefox First of all, developers can now view and modify a page's structure and layout right within the Firefox browser. With the Page Inspector, it is very easy to see the element you are focused on because the navigation through the HTML document is quick and convenient. The Style Inspector allows to ease the pages style editing. There is quick access to CSS properties now, where two views of the currently selected element are available: in the 'Rules' panel you can see details of this element's layout, values, etc. and edit them; while in the 'Properties' panel the styles are listed in alphabetical order, so you can easily search for a style to view its properties and values, as well as find information about what style sheet and rule set that value. The next interesting feature provided by the Firefox browser is Scratchpad, a unique tool that can be used by JavaScript programmers when they need to test or debug their code. This plug-in uses the Eclipse Orion code editor providing syntax highlighting, and some other features. What is more, Scratchpad provides its own window and makes life much easier when you’ve got a long script to debug. Besides, Firefox adds Full-Screen API for websites enabling to build web games and other web experiences that require using the entire screen.

What is more, Mozilla has introduced the support of Anti-Aliasing for WebGL, a Web standard that allows to display hardware-accelerated 3D graphics; and support for CSS 3D Transforms that lets developers to modify 2D elements into 3D using HTML5. The most convenient point about these two features is that they can be used without installing any third-party software.

Meanwhile, a large number of add-ons presented on the company's web site can still bring even more convenience than built-in tools. Take Firebug as an example of the most popular browser tools. Among the standard web development features (such as HTML Inspection, Layout, or style modifying), this one includes an advanced JavaScript debugger that allows developers to find scripts in an easy way, an ability to pause execution of codes, as well as set up step execution, an ability to watch value of complex expressions. Using Firebug, you can set a powerful log dumping as much information to the console as you can. What is more, network analyzing is also possible, especially in such cases when you find some of your pages loading too slowly, and you need to know the cause of this issue. These are only a few features available for the users of Firebox. Many users have considerable doubts when it comes to installing add-ons in Firefox, because they fear that with the release of the next update, those add-ons might become inactive once again due to incompatibility with the new version of the Firefox browser.

How did Mozilla team solve the add-ons compatibility problem?

Probably, there wasn't a single Firefox user who didn't face the problem of add-on incompatibility when updating their browser to a newer version in 2011. The problem lies in the fact that Firefox updates were released very frequently, but the third party software should have been updated separately. In addition, many developers simply did not update their tools to reach their compatibility with the newer versions of the browser. It was even a bigger problem because it could become a reason for some users to stop using some software at all.

Nevertheless, the Mozilla Team has been diligently working to resolve these issues lately. They began to teach Firefox, so that it could recognize releases and automatically update to the new versions of third-party software. Here is a quote from their plan clarifying the main idea of what they have to improve:

“We should change Firefox's assumption to be that add-ons are compatible, with a few exceptions. Binary add-ons are never compatible between releases and are also the highest risk of negative side effects. Firefox should automatically enable low-risk (non-binary) add-ons in new versions of Firefox, and check AMO for additional compatibility information.”

What is more, the users of alpha and beta Firefox versions are supposed provide some assistance in solving this problem now. They are offered to download “ Add-on Compatibility Reporter” that will allow them to report on every compatibility issue they may experience.

It's been only a few days since Firefox latest release, and only some user feedbacks are available now. Maybe, it is too early to judge them now. However, it's nice to know that these opinions are mainly positive. We all also hope on better Firefox experience in the future.

Referenced applications
What are your favorite tools for web development?

Concerning Compatibility Reporter: I hope some day there'll be an opportunity to review list of addons incompatible with the new FF update BEFORE installing that update.

Yes, you're absolutely right. This is the main purpose of the Firefox's developers. Just about the blacklist of incompatible add-ons they mention in his plan published on their wiki page: https://wiki.mozilla.org/Features/Add-ons/Add-ons_Default_to_Compatible

I like Firebug's logo. Indeed, it looks natural and comes with a funny idea behind. By the way, I'm really happy that Firefox will be able to tackle compatibility problems, at last.
As for my favourite tool development, I can highlight only WebSitePulse Test Tools. It provides me all the information needed.