All you need to know about liquid cooling systems: part I

If you like DIY PCs, or if you're interested in having the latest computer-related technology, then you really need to know as much as you can about liquid cooling. 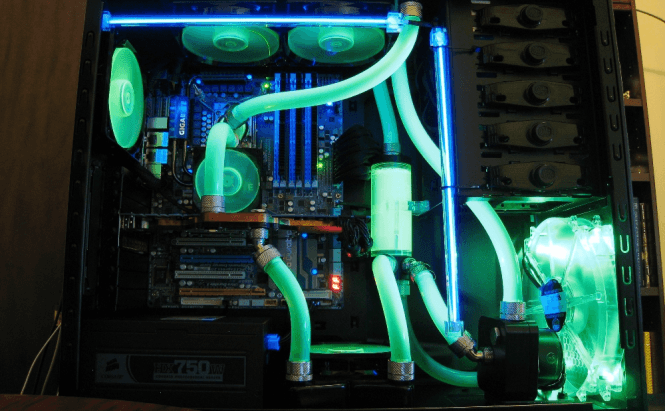 All you need to know about liquid cooling systems: part I

Over the past few years, trends have shifted quite a lot when it comes to computers. Back in the day, people used to care about how to get the most of their hardware, gaining as much performance as possible with little money. However, nowadays, people care more about having the best hardware and the coolest-looking rig available, one that impresses you, even if you're not into DIY desktops.

When modern PCs first came out, few people showed interest in liquid cooling systems, since, let's be honest, placing tubes filled with water next to your motherboard, CPU and graphics card sounds like a recipe for disaster. So, those who were quick to figure out that liquid cooling offered some advantages you couldn't get from regular airflow-based coolers had to manually drill holes in their cases to set their systems up. The good news is that over the last five years things have changed quite a bit, and liquid cooling systems are not just easier to acquire, but also compatible with modern cases, making pumps, reservoirs and tubing a lot easier to mount.

For those of you who are new to this topic, I will first try to explain how liquid cooling works, and what are the advantages of using such a system instead of traditional fans. At its very core, a liquid cooling system is made out of a reservoir, a pump and a series of tubes. The principle is, in theory, pretty simple: the coolant (liquid that flows through the tubes) is cooled in the reservoir and then pumped through the tubes, thus lowering the temperature of the hardware components. It circulates in a continuous loop, so you don't need to replace the liquid very often.

As far as advantages go, the most important one is that it's more effective than traditional fans, and in some way, easier to maintain. To be honest, if you spend enough money and plan things the right way, you can get all the cooling that your hardware requires from fans. However, there are two major bonuses you get from liquid cooling: noise reduction and a really cool look. Why the noise reduction? Fans generate more noise the faster they spin, and logically, they automatically spin faster when your components heat up. If you use liquid cooling, your fans won't need to spin as fast as they currently do, thus being much more silent. As far as the cool look is concerned, just take a look at the picture to the right and tell me that if that rig belonged to you, you wouldn't proudly show it off. If you choose to build your own liquid cooling system and have enough cash, you can make it look however you want and add LED lighting to perfectly highlight your hardware.

In case I've convinced you that a cooling system would be a great addition to your computer, you should know that it won't come cheap, and if you want something actually good, you're going to have to spend at least three or four hundred dollars. Furthermore, if you want to set up a custom liquid cooling system, it's pretty complicated even with a newer case offering the room that you need, or the necessary components. If you're having trouble setting up a DIY desktop, you should know that a liquid cooling system is even more complicated, so I recommend either buying an AIO (all-in-one) cooler or, even better, buying a case that already has liquid cooling installed. Just Google it, and you should find quite a few places that sell cases like this.

If your mind is set on creating your own liquid system, here are a few of the most trustworthy brands on the market: EKWB, XSPC, Alphacool, Primochill, Bitspower, E22, Koolance, Alphacool, Swiftech. To be honest, I haven't bought products from all of them, but those that I didn't test out either have been recommended by my friends or received a lot of love on specialized forums. Now that you know what to look for, let's talk about the four most common options that are available:

Now that you know the kind of tubing you can choose, I guess that I should tell you about all the things you require in order to make a custom liquid cooling system:

That's it for now, friends. In the second part of this guide I will tell you more about each of the components, and how you can set them up to create your liquid cooling system. In the meantime, if you're into hardware and DIY PCs, you might want to check out some of our previous stories like "How to overclock your CPU" or "Top 11 most interesting cases for your PC".