All you need to know about liquid cooling systems: part II

If you like DIY PCs, or if you're interested in having the latest computer-related technology, then you really need to know as much as you can about liquid cooling. 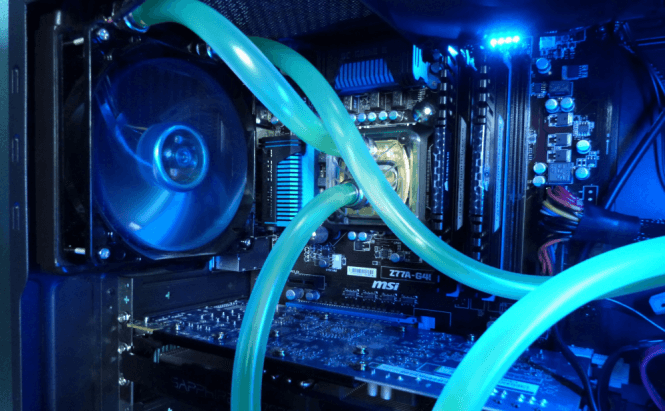 All you need to know about liquid cooling systems: part II

In PC cooling, water is a term that you will encounter at almost every step and on every corner, because in 99.9 % of the cases, this is the liquid used to chill down the heat generated by the PC components. The elephant in the room, the one we all actually know about, is that there's rarely liquid cooling without some overclocking as well. A good overclocking operation will be successful as long as the components are fitted and configured properly. It's not just a matter of "insert and play", but precise configuration of cooling fans (RPM speed adjustment) and components placement in the case too.

Furthermore, liquid cooling is often considered a unique kind of art, and the dedicated forums and Reddit threads where the most enthusiastic users show their stunning PC configurations come to support this idea. Anyway, it's an art that requires a lot of money, since quality components will cost very much. Of course, it can be done on a low budget as well, but you won't get the same feeling and results as someone who invested a lot into lights, custom fans, display grids and others.

If you made up your mind and decided that you also want to transform your PC into a powerful cooling station, then you'll need the tools to do so. Next, as promised in the first part of this guide, we'll be talking about the components of a watercooled system. Overall, you'll have to acquire: a case, radiator(s), tubing, a CPU block, GPU block(s), GPU backplate(s), memory block(s), pump(s), reservoir(s), fittings (compression, angles, bulkhead), stop valves, fans and coolant.

The most important ones, the ones you simply can't ignore or treat lightly, are:

Obviously, you have to make sure it's compatible with the chipset you're using. The two ubiquitous big choices for the clasically-cooled systems: Intel or AMD, are available in the case of systems that use liquid cooling as well. Expect the CPU block to require the allocation of a big chunk of your budget, as it's an undeniably important and also expensive part of any system.

If for CPU blocks things were rather simple and straightforward, for GPU blocks they get a bit intricate, as there's a lot of variety involved. GPU blocks for watercooled systems come in many shapes and forms, so you should also start by paying a great deal of attention to any potential compatibility issues. For every GPU block that you take into consideration, you will also have to make sure that you can obtain the required related hosing, pump, radiator or reservoir, if they're not already included. You have to make sure you can afford them too. Just make sure you double check every little aspect. As for a recommendation, The Slovenian EKWB (Edvard König Water Blocks) is a well-known developer of dedicated components for watercooled systems, including of GPU blocks. They don't come cheap, but they're universally acknowledged for their quality.

Not only by my humble opinion, the memory block is less important than the aforementioned two components. The CPU and GPU blocks do indeed need proper cooling, meanwhile the memory block can do fine just with some decent compatible RAM modules. Anyway, if you decide to make no concession and use watercooling for the memory block too, then you'll undoubtedly gain extra points for the final visual aspect.

The fittings are a very important part of building your custom watercooled system, as they're vital through the planning phase. You have to choose between compression or acrylic fittings based on which kind of tubing you will use. The more hard tubing will be deployed, the more acrylic fittings will be needed. Angled fittings and even stop valves could also be required later on, so keep that in mind.

At least one pump is mandatory, cause the heated liquid needs a way to be transported from the components to the radiators and back to the components. Reservoirs are not as indispensable, but they look good and they offer a much easier way to change the liquid from the watercooled system, or to fill the entire system when needed.

The radiators are both important, cause all that heat has to be cooled off by something, and complicated to plan, as they take space that not all cases come fit to provide. You have to figure out how many radiators you need, and where will you place them. In order to determine this, you have to check the FPI and the thickness of the radiators. The value of the FPI (fins per inch) also determines if and how many additional fans you require, and of which kind (static pressure fans or airflow fans).

These are just the most important components that you have to take into consideration when deciding to build a custom watercooled system, but they're not the only ones. There are also the case, the fans, the coolant, and others. During the planning phase, you'll pretty much end up having to take them all into account.

As for the planning phase, take a good time to think about the case, the radiators, and the type of loop that you will be using (single or dual). Also, there's no shame in sketching down how you want the loop to run. This will also help you figure out how many fittings you should probably need (usually there are two fittings for every water cooling item), or even if a single loop or dual loops are more suitable for your custom build, based on the case and the radiators that you considered for the job.

To ease things up a bit, I recommend you to look for cases that are designed specifically for water cooling. Parvum, Phanteks, Corsair, Caselabs, and Fractal are some perfect examples of such case firms. Keep both the compatibility and the size of the case in high regard at all time, as you don't want to end up with a case that's not compatible with the rest of the components, or that's simply not big enough to fit all the needed radiators, reservoirs, and so on.

Once both the planning and the acquiring stages are gone, a recommended next step is to test the components using traditional cooling first, just to make sure there are no problems here. Building first the PC outside the case might prove to be handy for a plethora of reasons too.

Next, since the tubing for the watercooled system already takes a lot of space inside the case, the cable management process has to be flawless. You will have to ensure there's no unneeded cable wasting space around, and often tedious and thorough manual cable sleeving may be required.

The only thing left is the actual building and priming of the loop. Once you finish cutting and fitting the tubes, if everything's good and successfully double checked, including the system and the tubing being properly sealed off and pressurized, it's time for pouring the coolant into the loop. There's no need to panic if there's a leak, just make sure you keep everything on your motherboard unpowered and power cables unplugged.

In conclusion, if you've decided to choose the path of custom-made water-cooled systems, you have my admiration. You decided to surpass the fear of risking hardware failures and you chose to put a great deal of work and money into achieving a silent and visually-stunning workstation that can also destroy any performance benchmark. You're probably already proud of yourself and of your rig, and you should be. Since you're probably also interested in this sort of topics, feel free to check our article on top interesting PC cases.