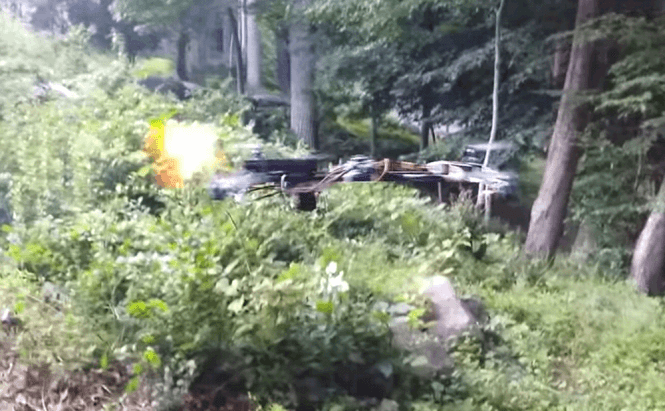 In the good tradition of human behavior, a teenager from Connecticut managed to strap a handgun to a drone and retrofit it to fire (at command) while in mid-air. To make things more official, Austin Haughwout filmed a test run and posted the video on YouTube. If until now we were hearing about people who used shotguns to take down the neighbor's annoying drone, soon enough we might hear about the flying devices firing back. The recently created weapon is a quadrocopter which triggers the gun while hovering in the air, shooting a round of ammunition every three seconds. What's really cool is the drone's capability to stabilize itself after each round as the gun's recoil throws it back about 3 feet with each shot fired.

Unfortunately for the 18-year old, his contraption may not be exactly legal, and the police are looking in to the matter thanks to the previously mentioned YouTube video. However, there is no legal precedent for such a case, so even if Austin has to go to a court of law, the trial will probably be very long and controversial. Back in 2013, when the issue was first discussed, drone regulator Jim Williams stated the FAA (Federal Aviation Authority) prohibits US citizens from attaching weapons to civil aircrafts. On the other hand, America has something called a Constitution and its second amendment grants everybody the right to bear arms. Furthermore, such issues may be completely irrelevant as someone willing to fire a drone-mounted gun at another person probably has other (more serious) charges to worry about than the fact that the flying device was illegal.

Great achivement, but totally unacceptable in a civil society.