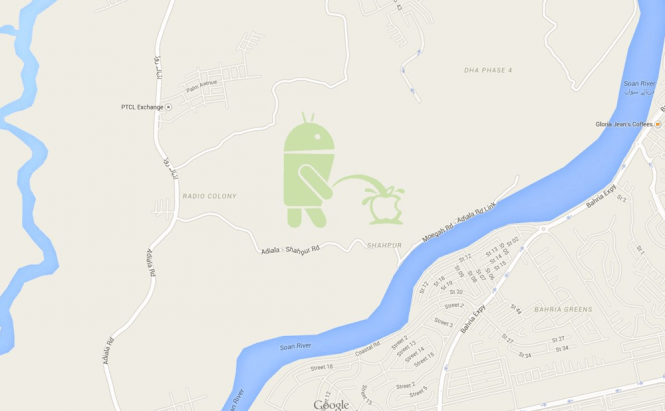 The Easter eggs that can be found in the Google Maps have been a massively debated topic, but one can't help but feel that this is more than a bit insulting. This weekend, a former Samsung employee named Ahmad Babar who lives in Pakistan discovered that instead of a park near Rawalpindi, the Google Maps app showed an image of the Android mascot peeing on Apple's logo (undoubtedly in an attempt to help it grow). Nobody is really sure about how long the image has been there, but a satellite view of the area shows nothing of the kind.

When made aware of the situation, Google quickly explained that this was definitely not the work of one of their employees. The company employs a group of outside contributors in order to keep Google Maps up-to-date and it appears that one of them came up with the eccentric idea. The IT giant officially apologized saying: "We're sorry for this inappropriate user-created content; we're working to remove it quickly." Unfortunately for the rest of us, they were also very prompt in taking the image down, so we are no longer able to see it with our own eyes (inside Google Maps).

The one question that remains is how many such images are laying in remote locations waiting to be found, as I'm pretty sure that this won't be a singular incident. Since most of Google's services are filled with Easter eggs, it is only logical that there may be a few that will even surprise the company itself.

Apple refused to make any official comments on the matter.