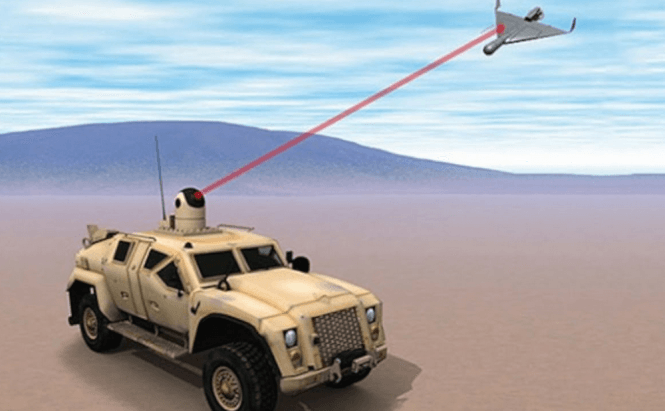 If you're into military technology you know that missiles are, most of the times, pretty darned effective but have one big drawback: a single one costs between $30,000 and $3 million USD and you can only use it once (duh!). In today's warfare, unmanned aerial vehicles (UAVs) or simply put attack drones are becoming more common by the day so the US army has contracted Boeing to come up with a better defensive solution against them. The well-known American corporation seems to have delivered, coming up with an ingenious laser system which is perfectly capable of taking down an UAV and only costs "a couple of dollars" for each shot it takes.

A recent successful test showed that the portable laser is perfectly capable of tracking and taking down a moving, untethered drone. The weapon uses a concentrated beam of up to two kilowatts and generally targets the drone's tail. After somewhere between two and three seconds of fire the drone ignites and crashes on the surface. If you're curios why the target is the tail, the answer is pretty simple: if you somehow disable the tail, the drone becomes completely uncontrollable even if it doesn't fall from the sky. Since this is a military project, there are several important details like the firing range of the laser or the costs for its manufacturing which are classified.

According to Boeing, the only drawback of the weapon is that it's a laser, which means that the system first has to check if it has a clear shot to and beyond the targeted drone in order to make sure that it doesn't inadvertently destroy something else as well.