Google X's military robot tested out by the US Marines 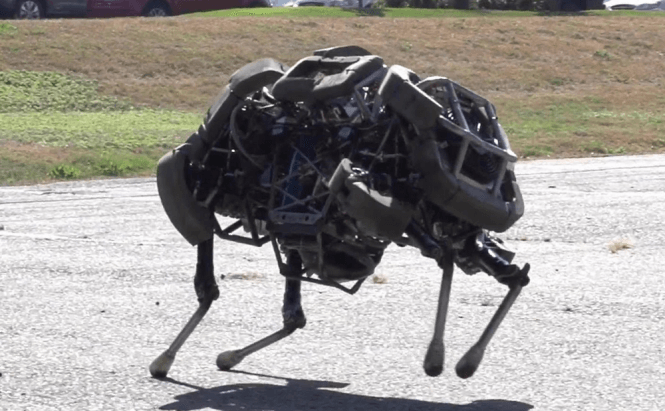 Google X's military robot tested out by the US Marines

When you think about Google / Alphabet, the first things that pop into mind are its privacy compromising search engine, dorky-looking glasses and some pretty cool driverless cars. However, the company is also working on other stuff which, at times, goes beyond our imagination. For example, last week, the U.S. Marines have been testing out the combat robots made by Google X (actually by Boston Dynamics which was acquired by Google and incorporated into its X division).

The military robot is a quadruped named Spot which weighs approximately 70 kilos (154 pounds) and is controlled through a wireless system with a range of up to 500 meters (1640 feet). The prototype is propelled with the help of a hydraulic system and is electrically operated. Its utility is to scout ahead and discover any potential enemies or threats hidden from plain sight. Spot is equipped with a LIDAR (Light Detection and Range) sensors array which gives it a 360-degree view of the surrounding environment. (It's the same system as the one used by Google's driverless cars). The tests which took place at the Marine Corps Base Quantico in Virginia checked out the robots abilities on various terrains (plains, hills, wooded areas and urban zones) and have concluded that Spot is far more agile and quieter than its predecessors (LS3 and Big Dog). Talking about the trials, Capt. James Pineiro, the branch head for Marine Corps Warfighting Lab stated: "We want to continue to experiment with quadruped technology and find ways that this can be employed to enhance the Marine Corps warfighting capabilities."