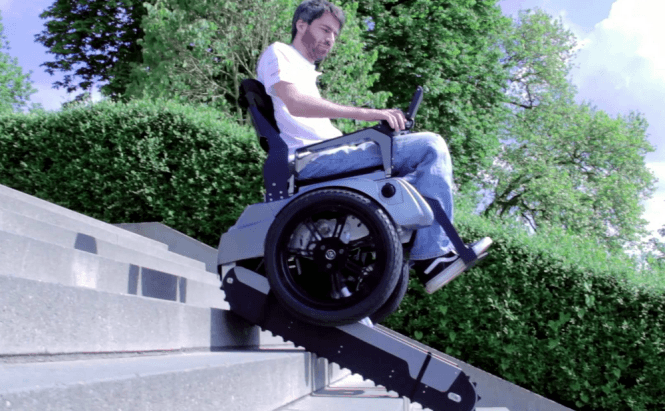 A team of students from ETH Zurich and the University of Arts in Zurich came up with a working prototype of wheelchair that can climb and descend stairs by itself. This technological wonder is fully automated, so it can help its user move effortlessly on regular ground with a top speed of 10 miles per hour and can climb regular stairs with slopes between 17 and 34 degrees at one step per second. Furthermore, Scalevo, as the project has been named by its team of developers, will even work on circular staircases.

Unfortunately, at the moment, we don't have too many technical details about the wheelchair. If you're interested, all that I can tell you is that it's 65 cm wide, 105 cm long, weighs approximately 101 kilograms and can function in optimal conditions carrying a weight of up to 160 kilos. Currently, Scalevo is just a prototype which will be entered in the Cybathlon Challenge competition (that will take place in 2016) and only after that's done the team will start working on ways to mass-produce the wheelchair. This means that it will be at least a couple of years until people who need it will actually be able to purchase the product. The good news is that according to its developers foresight, when it will hit the markets, Scalevo won't cost much more than a regular wheelchair. Today's technological advancements perform real miracles for people with disabilities. Just a few years ago would have thought that we will actually see wheelchairs that can climb stairs by themselves, prosthetic arms that give the patient tactile sensations or exoskeletons that can teach paralyzed people to walk again?