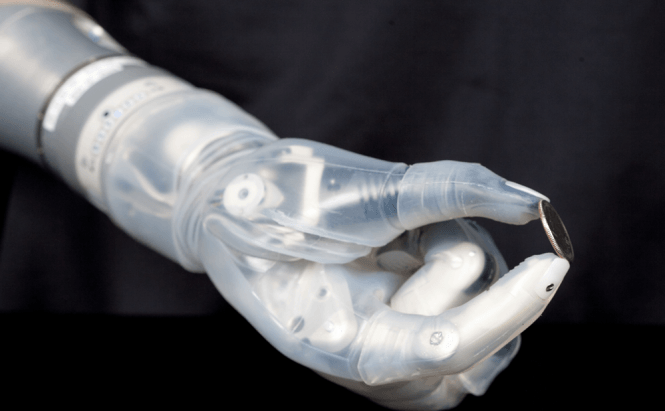 Prosthetic technology jumped to a whole new level, being capable of doing things that we couldn't even imagine just a few years ago. The Revolutionizing Prosthetics program (which is a part of DARPA) has created an innovative prosthetic arm which not only allows its user to control it with his thoughts but also provides touch feedback. This means that patients using this prosthetic will be able to perform precise movements, which require both fine control over the arm as well as tactile sensations.

In a previous experiment, the researchers implanted sensors into the sensory cortex and the motor cortex of a patient. This setup was successfully used to translate the volunteer's brain activity into voluntary hand movements. However, the scientists took things one step further and used the data gathered from the initial experiment to add a touch sense. In very simple terms, the arm is equipped with sensors which send electrical impulses to the patient's brain communicating the touch of an object. The implanted sensors translate (for lack of a better term) the impulses into data that the brain can read. This new experiment was a complete success as a 28-year paralyzed patient, volunteered to participate, was able to recognize with 100% accuracy which of the fingers was touching the item. The scientists even tried to be sneaky and see what reaction they would get if they touched two fingers simultaneously (without telling him), but he immediately asked if "somebody was trying to play a trick on him." It will most likely still take a while until this technology will be able to regularly aid paralyzed patients, but its existence and the success it registers is a great step forward.