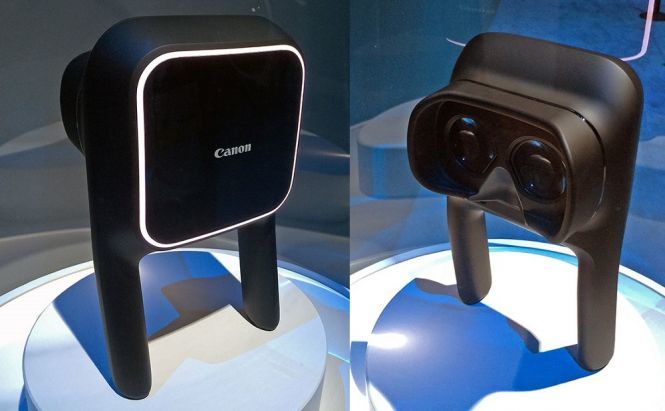 Virtual Reality is considered to be the domain of entertainment giants and mobile device manufacturers like Sony, Oculus and Samsung. However, as more and more startups and developers enter the growing industry, it's not surprising to see an optics manufacturer like Canon join the race.

Back at the Canon Expo 2015, that took place in New York last week, the company revealed its VR prototype, which looks like a periscope and is said to be chiefly made for educational purposes rather than entertainment . The handheld device doesn't have a codename at the moment, thus, it's most likely to be a very early prototype. Nevertheless, Dave Gershgorn from Popular Science, who managed to test the device at the conference, says that “it’s sturdy, easy to use, and best of all, doesn’t take a lot of finagling to put on and use.”

On the hardware side, the prototype has two 5.5-inch displays with the resolution of 2560x1440 pixels. As the wearer navigates through the 360 degree sphere, the device tracks all movements and changes the picture within the 120 degree viewing angle. The demonstration video was shot with Canon's cameras and is said to have the staggering resolution of 56000x28000 pixels, which is, clearly, too much for mere entertainment. Nevertheless, as it's just a prototype, anything may change before the release.

There have been much more interesting projects revealed at the expo, including 6D cameras and a mixed-reality headset, so if you are interested in learning more about what Canon is currently working on, explore the official website. The expo will also be coming to Paris in October, so you might as well be interested in seeing it all with your own eyes.