Here's a list of weird charger concepts to harness energy of any kind to power your gadget. 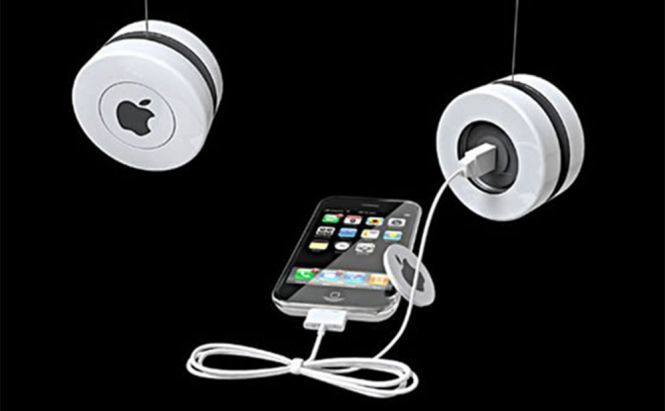 Cell phone battery life has become a great concern for many keeping us on the edge of panic about running out of juice. To release this tension and ease our life, new charges using alternative sources of energy are invented every year. In my previous article, I was talking about the ready-to-buy uncommon device charges. Now I'm going to get through even more weird concepts showing how to harness energy of any kind to power your gadget.

Kinetic energy is one of the most popular sources for the latest charging concepts. One of the activities that maintains it is walking. InStep NanoPower is based on the following principle: it captures the mechanical energy we produce during walking and converts it into electricity used to power portable electronics. This must be perfect for outdoor travelers and hikers! The concept of this charging gadget basically lies in charging your phone while you're dancing. Gotwind Dance Charger is capable of converting the kinetic energy of dance moves into electricity to power your cell phone. Now you can dance to your favorite song and at the same time charge your phone that plays it for you. Thermoelectric Converter is a concept designed by Fujilim which uses human heat as the source of energy to power personal electronics. The thermoelectric film starts generating electricity when detecting the temperature difference of just one degree. The device shown in the picture can produce power when you simply touch it. Fujifilm expects to develop the concept further on and one of the ideas is to use the organic thermoelectric material as an attachment to our bodies to be able to power devices anywhere we go. This one will surely please those who are into outdoor activities. Orange Power Pump generates energy from foot air pumps which are generally a standard piece of camping traveler equipment. One minute of pumping will get you 5 minutes of call time. The device is lightweight, colorful and “green” – what else is needed for a regular camper? The next concept charger might get attention from frequent air flyers. This self-generating travel charger suitcase can generate energy from your rolling luggage when you're simply strolling it. Now your suitcase can not only store all your devices but charge them as well. It's hard to believe relaxation can also be used as a source of energy. With Lotus, a handheld meditation power converter invented by industrial designer Clara Zamboni, you are offered to meditate while spinning your thumb around the Lotus pad and it will harness the kinetic energy created. The shape of this device is so gorgeous that it just beckons you to touch it, hold it in your hand, spin its pad... Though it might not probably be a very effective charger, I still could buy it for its awesome design. The idea behind this concept charger by Zheng Weixi is obviously to play Rubik's Cube to power your device. The Magic Charger is based on the electro-magnetic induction principals converting your movements while you're twisting the cube into the energy to charge your cell phone. We won't go into detail about its power speed as it is apparently not very fast at charging. But its design is so adorable that it will probably lure you into purchasing the Magic Charger. Another way to juice up your phone through playing is to use iYo Yo-Yo Charger created by Swedich designer Peter Thuvande. Basically, the principle is the same as with the Rubick's Cube charger – you play Yo-Yo and power your phone, though you don't have to strain your brain so much.

This charming toast-shaped charger doesn't use any uncommon source of energy. Still, it is capable of making the ordinary process of charging much more fun. You just slide a lithium battery of your smartphone into Toasty Charger, pull the handle down and wait till your 'toast' hops out fully charged. Apparently, one of the cutest charges among all ten. As USB cables tend to become shorter, it's rather frustrating you can't just lay on the couch playing on your tablet because you're short of cable. This cute little ball of yarn will help you have your gadgets charging even in the farthest corner of your home or office. Previous story A Step Towards a Better Future or an Anti-Utopia? Next story The Heart That is Still Bleeding

Wow!! This is most effective article. Full of information have in there. This articles help me most. Thanks for this.

Magic Phone Stand would be a good fit for this list also.

I'd like to try Gotwind Dance Charger, it will be awesome if I get one of these!

Rubik's Cube Charger is the best.