Would you be able to survive all alone in the wilderness? Would zombies or aliens be able to kill you? Here are the best ways to find out. 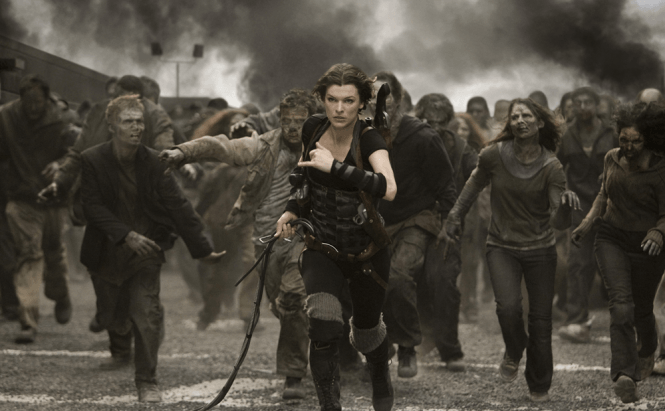 Hello, dear adrenaline junkies! A lot of people think of video games as a comfortable and relaxed environment where you chill and move stuff around with your mouse, but that's just 'cause they haven't seen the hordes of zombies, the human-eating alien crawling in the corridor ahead, or the shark we swam by to get to the tools crate. Survival games are meant for thrill seekers who love the feeling of their heart beating in the throat.

Survival is a game genre in which the player is put in a very difficult situation that he has to overcome in order to.. you know.. avoid death and stuff. These games find a way to make the players always feel inferior to their enemies either by making them find ways around unkillable creatures, or by forcing them to make do with very few resources against a seemingly endless mass of opponents that can appear at any time. Here are ten of the most awesome survival games you will find on the current market: Even though it's just number ten on this list, Stranded II is probably my favorite of the bunch. This game actually is survival one on one. The adventure starts with your boat hitting some rocks and you swimming towards an island as the sole survivor of a shipwreck. When you get to the shore, you will quickly realize that you are in an unknown place, with absolutely nothing but your bare hands. You will soon start to feel hungry, thirsty and tired. Think you've got what it takes to survive? The downside of this game is that it's suited for the older gamers who have been at it for a long time, as they are the ones who can overlook the outdated graphics for the thrill of the challenge and play out the story to the end. This indie survival game is a nightmare for new players. For starters you have no in-game map, so you will either have to find big landmarks or guide yourself according to sun's movement on the sky. Secondly, the game can only be played in multiplayer mode and we all know that human-controlled characters are much more dangerous than AIs. You start out with a few basic items such as a rock, two bandages and a torch, then have to find resources and craft any new stuff you require. At first you have a limited list with instructions for creating several items, but you will be able to track down more blueprints while exploring the vast open-world. The dangers in this game are pretty much endless: starvation, hypothermia, drowning, radiations, attacks from animals or other players, etc., and the game will constantly place items in dangerous zones thus ensuring that playing it safe isn't really an option. This horror survival game is a true master piece. Very few games can manage to blend terrifying scenes with heart-breaking moments in such a great fashion. The action starts on a fictional island where your character along with a few other survivors are the only people immune to an infection that has turned the entire population into zombies. The player must try to find the cure and escape the dangerous environment while dealing with the surrounding hordes of zombies. Although you will eventually get to utilize firearms, this game is mostly based on melee combat (blunt and bladed weapons). From a personal standpoint, Dead Island made only one critical error. It created the best trailer that the gaming world has ever seen, and the gameplay never reached the same emotional intensity as the trailer. Other than that, the graphics are pretty cool and the action is captivating so it's definitely worth your time. This single-player action-adventure survival game has a few elements that are inspired from Minecraft. The player takes the role of a scientist named Wilson who is thrown into a dark, soul-crashing world where he has to survive for as long as possible. In order to do so, you must keep your character healthy, fed and mentally stable as the supernatural creatures who are constantly trying to devour him take their toll on his psyche. The game gives you 20 experience points for each day that you survive. Those points can be used to unlock new playable characters starting with Wilow (160 XP) and ending with Wickerbottom (1,280 XP - the maximum amount possible in the game). The multiplayer version of the game (called Don't Starve Together) has been announced this spring and is currently in a closed beta-testing stages. There's one last thing you need to know before heading into the game, unless you have a Touch Stone (which is very rare), death is permanent. Miasmata is a creepy yet beautiful exploration and survival game. The pseudo open-world of the game is well designed with beautiful landscapes that will take your breath away. However, the anxiety-filled atmosphere will quickly take its toll. The fact that you are completely alone for the majority of the game will also make you feel more and more insecure with each passing day. The story revolves around a team of researchers who got infected by some kind of a disease and have disappeared while trying to find a cure. Your goal is to continue their research and the fact that you're infected as well will surely motivate you. The actual problems start when you discover that there's some kind of a creature lurking around the area and, since you can't kill it, all you can do is avoid it as much as possible. This single-player game will test you in a lot of ways, so it's worth every penny. In all honesty, I can't wait for the final version of this game to be officially released. At the moment, The Forest is available only as an alpha build, and it still made it to the 5th position on this list. Another classic single-player horror-survival game, The Forest is everything you expect it to be. To thrive in the game's dangerous environment you will need to keep your character fed, healthy and well-equipped, build your own safe haven and survive the creatures that are out to get you. The story starts with your plane crashing and the kid that was standing next to you getting abducted by some kind of a mutant tribe's man. After waking up you are all on your own, left to fend for yourself with nothing but what you can salvage from the wreckage and resources of the forest. The game is actually quite relaxing until they start to appear. Just one piece of advice: when you get to cave (oh, you will get there at some point), don't leave before finding the flare gun. It's invaluable. 7 Days to Die, or simply 7DTD, is an awesome blend between the horror-survival, first person shooter and role-playing genres. The zombies that you have to beat are so slow and weak during the day, that hunting them is actually quite fun, but you have to remember that once the night comes, you are the prey. To make matters worse, the undead become tougher, faster and more aggressive with each passing day. The plot places the main character in a post-apocalyptic region of Arizona named Navezgane County, in which all of the former residents have transformed into zombies for some unknown reasons. Your main goal is to survive, but how you do that is all up to you. 7DTD allows you to craft, destroy and manipulate objects. Furthermore, the game features a realistic physics engine, so things crumble when they no longer have anything to support them. A little gameplay advice: when you are supplying your safe-haven with meat, the zombies can smell it, so be on your toes and get ready for a fight. Dayz is an MMO horror-survival that you will quickly fall in love with. Craft your own items and armor, go hunting with your friends, take revenge on your enemies and, most importantly, don't get killed by the violent zombie hordes. The game takes places in a 225km2 open-world post-Soviet state called Chernarus. DayZ has been available to the public as an Alpha release for almost a year now and is planing to go into its Beta stage by the end of 2014. The game offers some great-looking graphics, a realistic environment where you need food and water to survive but also where the other human players are generally much more dangerous than the zombies Are you ready to get freaked out of your mind? Alien Isolation can do that to you within less than 15 minutes of gameplay. Part of the Alien series, the game focuses on Amanda Ripley as she tries to solve the mystery behind her mother's (Ellen Ripley) disappearance. The action takes place on the Sevastopol space station in a decorum and with technology from the 1980s. Once you discover that there is a man-eating alien that is impossible to kill aboard the space station, things tend to get rather complicated. Alien Isolation is without question one of the scariest games that I have ever played. The Last Of Us

I'm having a very hard time deciding if this is a game or a work of art. The Last Of Us is a horror survival game where you play the part of Joel, a single father who had previously lost his daughter. Your goal is to escort a young girl named Ellie through a post-apocalyptic zombie infested world. The whole plot revolves around the moral decisions that Joel has to make, as his young (but wise) traveling companion might be the only cure to the infection that has brought humanity to its knees. The Last Of Us has some of the best voice acting you've ever heard and the best written story you've ever been a part of, winning multiple awards and being considered by most the pinnacle of gaming. Sadly, the game is only available for PS3 and PS4 (published by Sony, so we won't see a PC or Xbox version anytime soon). In case you were wondering if anybody else liked this game, I can tell you that it has already sold 7 millions units, and it was launched on June 14th 2014.

Previous story Finally, a Toy That Allows You to Do Some Covert Parenting Next story Dropbox and Microsoft Decide to Work Together

The last of us is an awesome game, but I finished this only in 2 days. OMG!

DayZ, Alien Isolation,The Forest are the best. In my opinion.