Milk Nanny - An Invention That Could Help With Late-Night Feeding 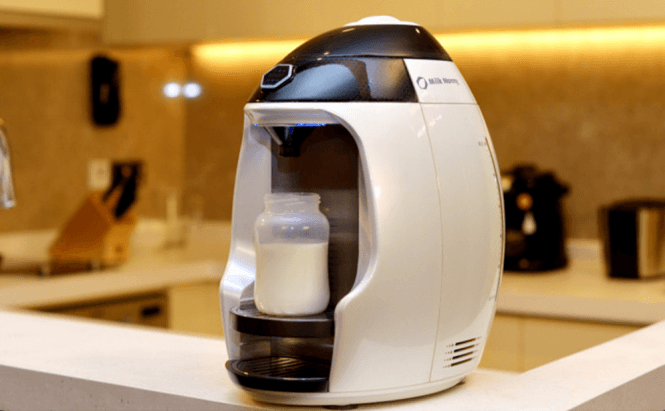 Milk Nanny - An Invention That Could Help With Late-Night Feeding

If you are a parent, then you surely know what a "pleasure" late-night feedings are. Waking up in the middle of the night after a long day and boiling the water, being precise with the quantity of milk powder added to the mix, then cooling the formula to just the right temperature are not that easy. Milk Nanny is an upcoming smartphone-controlled device that will make feeding your baby a lot easier and faster.

Milk Nanny is a new Kickstarter project that is capable of preparing the formula and cooling it to serving temperature all by itself in just 15 seconds. The way this works is as it follows: the first thing you need to do is to use its iOS or Android app to scan the barcode on the milk powder. This allows the device to know the exact ratio of water and powder for the perfect mix. Milk Nanny can store enough resources for 12 eight-ounce bottles so it should be enough for an entire day of feeding, but in case it starts running low on milk or powder it will send a notification to your phone and turn on a light on the device itself. Generally, this kind of appliances has a big problem with clogging as the steam infiltrates the powder reservoir and forms lumps. Milk Nanny features an innovative anti-clumping technology and the powder reservoir is sealed air-tight so you won't have this problem. Another thing that all the parents will like is the deep ultra violet system (DUV) which protects the mixed formula from bacteria and germs.

At the moment Milk Nanny a is part of a funds raising campaign, with a goal of $100,000 that will end on February 27. So far, the project has gathered a little over $33,000. If you're interested or you want more details, you can visit their Kickstarter page by clicking here.