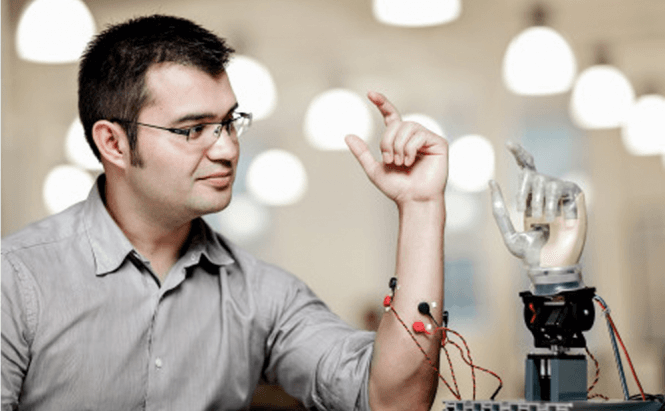 Today's science and technology advancements seem to be a part of science fiction movies which we never thought possible. Think about it: the processing and storage power of computers have grown exponentially, we have little drones flying around doing God knows what, driverless cars, repurposable robotic furniture and so one. All of these seemed just a figment of our imagination no more than 20 years ago.

Recently, a trucker from Sweden was the first man to test an osseointegrated mind-controlled prosthetic arm. Part of a study initialized by Max Ortiz Catalan, Bo Håkansson and Rickard Brånemark, designed the prosthetic limb to test how durable and effective a brain-controlled artificial arm would be.

The prosthetic is osseointegrated which means that it is attached to the bone, muscles and nerves with the help of a base implanted directly into the bone. Along with the base feature, several neuromuscular electrodes were also implanted in order to offer the patient improved control over the movements of the arm.

The implant uses something that the researchers call a "bidirectional interface" which doesn't send electric impulses only from the brain to the limb, but also from the surrounding environment (external sensors) to the brain. Coming up with ways to translate the information captured by the external sensors into information that the brain could precisely understand was one of the lengthiest stages of the project.

According to Mr. Magnus, the man who tested the prosthetic limb throughout the entire process, the artificial arm felt more like a real one than a tool or a machine. Although it was only used inside a lab, the researchers believe that the project is very feasible for everyday use as well. Furthermore, the scientists predict that mind-controlled osseointegrated prosthetic limbs could become available outside of Sweden in just a couple of years.