As expected, Xbox One has hit the shelves, and just like its rival console from Sony, PlayStation 4, has crossed the mark of one million sales within less than 24 hours from its release. 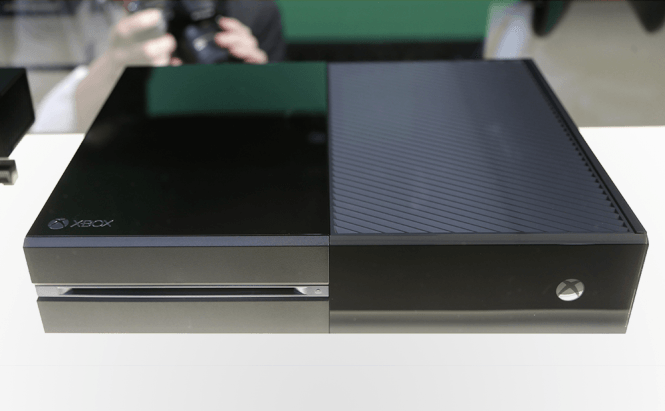 As expected, Xbox One has hit the shelves, and just like its rival console from Sony, PlayStation 4, has crossed the mark of one million sales within less than 24 hours from its release. Microsoft gave Sony about a week to enjoy the US market without any competition (in most parts of the world, Xbox One has actually come out even earlier than PS4). I'm intending to give you more of an objective and unbiased description of the new console, although I cannot promise to ignore an odd obvious comparison to PS4. And if at the end of this quick review you'll find yourself thinking that I've been a bit subjective and obviously in favor of one of the consoles â€” well, guilty as charged. But I'll try to hide it.

Compared to the previous console by Microsoft, Xbox 360, the new one has gained in size. The intention behind that is quite obvious â€” Xbox 360 got overheated too easily, so the cooling system had to be renewed and remodeled, which led to the bigger size. It is sort of good news, especially if you don't care that much about having enough room for the device and simply want it to work flawlessly. It weights around 6 pounds, just like PlayStation 4, but the latter can operate when put either vertically or horizontally, whereas the Xbox One can only work horizontally. The design is kind of squarish, resonating with the streamlined logo, but is still quite pleasant to look at.

Miscrosoft claims that Xbox One has eight times as much graphic fidelity as its predecessor, Xbox 360. There's now 8GB of RAM, which is 16 times that of Xbox 360. The hard drive space has doubled, letting you store up to 500GB of content, same as the PS4. USB has been kicked up a notch from 2.0 to 3.0, too. The controller has a redesigned D-pad and features Microsoft's new improvement â€” what they call Â«impulse triggersÂ». These were put in place in order to moderate the crazy pervading vibration of the whole controller, making it more sensitive and, in a way, user-friendly. Xbox One comes with only one wireless controller, but supports up to 8 of them, all working on AA batteries.

What PlayStation 4 Â«lacksÂ» in comparison with Xbox One is motion and voice control over onscreen actions. I've put Â«lacksÂ» in quotation marks simply because that is neither a necessity for a home gaming console (in my personal opinion) nor is it a well though-out and impeccable feature in the One. Let me elaborate.

The new Kinect comes in bundle with the console and can optionally be completely turned off without compromising anything (except for the games that do require Kinect). The cable for Xbox One Kinect is 3 meters long, more than enough to comfortably place it in the living room. By a mere voice command, you can instantly switch between whatever you are doing at the moment and something else, and so can anyone Â«introducedÂ» to the Xbox (whoever has an account and went through the authorization process). According to some early reviews, a voice command has to be precise in order for Kinect to recognize it, which raises the question: isn't it easier to use the controller? Well, not for everyone, apparently. Some people like this futuristic feeling of controlling their device using only their voice. I myself find all those systems (Siri, Google Now, etc.) to be a bit of a stretch from an ideal voice recognition system; it always feels like a good idea, but never like a finished product. But again, that's just me.

A welcome change from Microsoft reflects the complaints and the concerns about Kinect's previous privacy policies. Microsoft has decided to deal with it more openly and reassured the new customers that they are always in control of what data is collected by Kinect as well as the level of personalization. The data collected by Xbox will never be transmitted anywhere else Â«without your explicit permissionÂ».

That being said, I don't think using Kinect in big families with more than one kid will be delightful. In my experience, it is never a good idea to give equal power over something that is intended to be used by a single person at a time. Well, the battle over the TV remote might just turn into the loud battle of children screaming at the Kinect. Or adults, why did I exclude that possibility? Gamers can get quite agitated at times. Both PS4 and Xbox One come with 21 games at launch, the main difference being their backward compatibility. In PS4's case, it will be possible at some point to pay extra $10 or so to move a previously purchased game (for the PS3) to the new device; but Xbox One does not have that even in plans. What's also important to know is that if you are all about graphics, the PS4 will give you better quality (1080p output) compared to the Xbox One (720p output) in the same game, which you can see by comparing such launch titles as Call of Duty Ghosts, Battlefield 4, and Assassin's Creed IV: Black Flag.

That is where the One stands out and puts the PS4 to shame. Well, it does, but only if you are into watching the TV. A single HDMI slot for the Xbox and TV is here to serve you if you need it, and you can switch between TV, games, and other media with voice commands.

Good things come at a price, and things like Netflix, Skype, and the TV Guide are locked behind the Xbox Live Gold pay wall. The subscription will set you back $60 per year. Which one should I buy?

That's the ultimate question, you're right. And you can answer it, but it really depends on what you are looking for. You may read my previous article on the PlayStation 4, and hopefully that'll help you decide. Read a couple of reviews, preferably independent ones, walk to a store, talk to a consultant, play around with both consoles. And figure out your priorities, more importantly. That's where the decision should come from.

Both devices have already had their downs since the sales hit: some PS4 buyers ended up getting a damaged device due to delivery issues, and some Xbox consumers were not thrilled by their broken disc drives. Sony and Microsoft rushed to reassure their clients that they'd settle everything by replacing broken consoles, though.

As a Christmas present, I would have been happy to get any of these. Although I don't think I can hope for anything more than a set of AA batteries for the controller.

Referenced Windows applications
Which one is better, Xbox One or the PS4?

Xbox is One True.

You can't play any old games on the new Xbox1. Shame...
Give it 12 months of bad sales, complaints (de-bugging, software upgrades) and see if the Xbox1 can compete with then with anything, maybe better games.
Till then What a piece of crap.

Hm. Let's see. One has a better CPU, dedicated video memory, separate RAM and CPU for background updates, supports 1080p output, is slimmer, lighter, doesn't look like a VCR, promises at least *some* kind of backwards compatibility... and the other is $100 more expensive. I'm not sure, it's a tough choice. /s

PS4, Xbox One is garbage.