Nintendo is a strange company! Once a leader in video games, the company currently is in creative slump. Blaming the worldwide recession, the company... 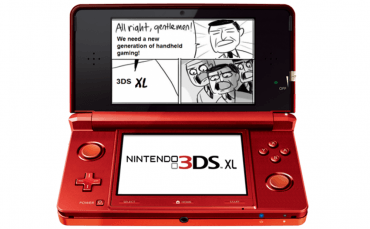 The new portable video game console will be launched around August 19th in the United States for two hundred dollars. The main feature of this new and improved gadget is that it will have a nearly 90 percent larger screen and improved battery life. Hence, the top screen, which will continue supporting 3D functionality, will measure almost 5 inches across (4.88''), and the bottom screen will measure 4.18 inches. The console will be available in two colors: red and blue and comes with a 4GB SD card that can be used to store games and videos purchased and downloaded from Nintendo eShop.

Reading this announcement made me really sad for the company. The company's dominance and progress has stopped with the Super Nintendo gaming console. Everyone used to have and play games on that advanced video system. Now, everyone has either Xbox or PS3. Realizing the company does not have a chance to compete with Microsoft and Sony (the developers of the modern and popular gaming consoles respectively), the company decided to concentrate on their hand-held device. The problem here is that it competes with all mobile phones there are on the market. Our smart phone are now packing quad-core processors and so many sensors that they can easily compete with Nintendo's portable. To make the matter worse, PSP also is a lot more advanced than Nintendo's gaming console, though without 3D screen. The company prematurely made a bet on a 3D screen and now it sees it's losing the battle. Now, I highly doubt an attempt to rejuvenate the game will pay off, but hey, until the company is in total slump – there is a chance of recovery. Maybe a larger screen is what the user wants? I guess we will know how well the new console is received by this year's Christmas purchases. Until then, we will wait.

Does increasing size counts toward innovation?

Whoever wrote this really has little idea what they are talking about. Case in point: they refer to Sony's current generation handheld as the PSP, when it is actually the PS Vita. The PSP, which is their last generation handheld, is not a lot more advanced than the 3DS. Also, the 3DS XL is not meant as a new generation or even as a revision of the 3DS. It's literally just a new size option. It's like a laptop manufacturer releasing a 17" model to go alongside a 13" model. The product is meant for people who want a 3DS but also want a larger screen.