The Google Map's Next Dimension

The “next dimension” in Google Maps has recently been announced by Google. Well, on June 6th to be precise. This announcement is a direct competition... 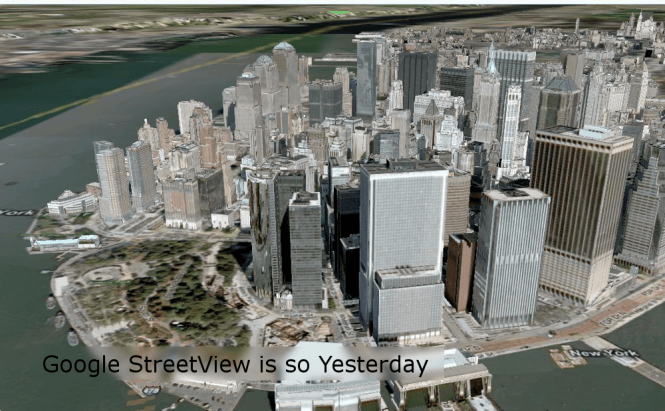 The Google Map's Next Dimension

The “next dimension” in Google Maps has recently been announced by Google. Well, on June 6th to be precise. This announcement is a direct competition with Bing maps by Microsoft and, as many analysts speculate, a jab at the improved maps from Apple for their iDevices.

Do you remember how awesome it was to explore the planet using Google Earth? Flying from one point on the planet to another in just matter of seconds. Zooming in to some areas and exploring your location in relation to some other locations? Pinning places you've visited on this awesome perfectly rounded globe? Then everything got even better – you could zoom in so much that streets revealed themselves. An unbelievable amount of detail and information presented itself. Now, before going to an interview in an unknown location, you could preview the street and look like you know what you are doing, while being extremely nervous inside. But Google did not stop there.

I assume it took a few years to collect all the necessary data for 3D maps of some cities. A squad of planes outfitted with high-definition cameras were sent to fly over some big cities to take lots and lots of pictures. A myriad of images taken at a 45-degree angle then were put together to comprise a 3D module of a location on a computer. As a result of this tedious work, you can now fly over some cities right on your computer's screen without needing to go anywhere. What it means is that now turn-by-turn directions can be previewed before you actually travel to a new place, but this time you will fly over your trip as close to reality as it has never been possible before. Check out this article's image on top to see how realistic the view of Manhattan is. In the near future, those maps should be available for download for your navigators and phones, giving you mobile freedom for your future explorations.

Along with such a new and exciting feature (by the way, all other competitors are catching up with this idea as well), there are some enhancements made to the current maps. The mobile phones will soon feature offline caching of the maps. Currently, the cached map area can only be accessed when there is access to the Internet. All it does is saves your 3G or 4G traffic by using the cache to load pre-saved areas of the map. The new feature will allow you to access the maps without accessing the Internet at all. This is great news for frequent travelers or campers like me. It is rather hard to find an Internet connection in the wilderness.

Google did not say when these new features will be available, which means the company announced the news only to beat Apple to it. However, the previews looked great and their healthy competition is rather a good thing for us, consumers, don't you think?!

Referenced applications
A new way to look at our cities?