Ladies and Gentlemen, on June 6th 2012 the Internet became larger. I am talking about the new version of the Internet Protocol, IPv6, which raises... 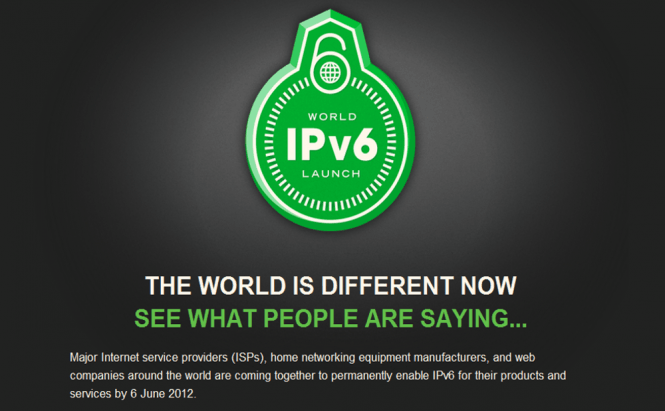 In short, the current addressing system exhausted itself in 2011, when the last address block was assigned to the Regional Internet Registries. Meaning the network couldn’t grow anymore without some drastic and expensive changes to it. Over time it became obvious that a redesign of the Internet Protocol was necessary. The new protocol would extend the number of address combinations as well as add various improvements to increase efficiency and cut some of the costs associated with maintaining the network. The protocol was created and adapted but its implementation means that the software and hardware upgrades must also be made, which is quite expensive and in some cases impossible. However, the good news is that those upgrades can be done over an extended period of time. The new version of the protocol, appropriately named IPv6 (the current version is IPv4, while the 5th version was experimental), will run alongside the current version of the Internet Protocol making the switch virtually invisible to a regular user of the Internet, at least at the beginning. Down the road, every single device connected to the Internet will have to be switched to the new protocol but it won’t happen overnight as it might take at least a decade to accomplish such a task.

Back in June of 2011, a few major Internet giants tried out the new protocol on their servers for 24 hours to test for the switch, and as there were no major problems, on June 6th of this year those companies became the first companies to have their servers among the first machines to join the expanded, new Internet. Over time, a number of large organizations, including your Internet Service Providers, will upgrade their hardware and services in order to join the new network and stay online. You might also need to get a new router or upgrade your operating system on your computer to the one that supports IPv6 (Windows Vista and 7 support the new protocol). To know more, simply search Wikipedia for “Internet Protocol” or for a quick and fun way to understand this problem check out The TCP/IP Guide: IPv6 Address Size and Address Space. I hope you will enjoy it.