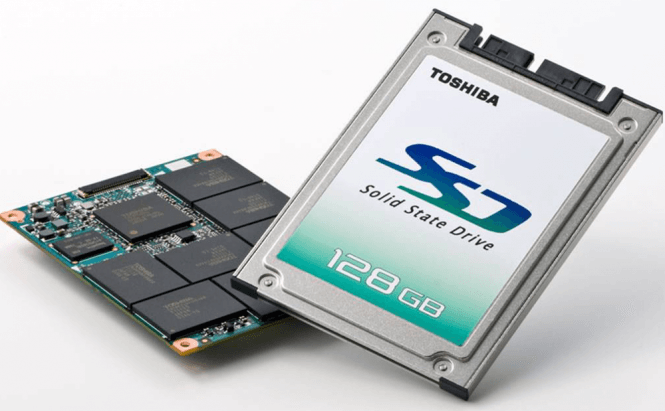 A new line of high-performance, energy efficient MLC NAND solid state drives (SSD) made using 19nm manufacturing process was recently announced by Toshiba. The drives will be available in 64, 128, 256 and 512 GB capacities sometime by the end of this year with their mass-production beginning August of 2012.

The THNSNF series drives will come in 2.5-inch case (both, 9.5 mm and 7.0 mm height) and mSATA form factors with weights about 50g and 8g respectively with the transfer rates of up to 6 Gb/s using SATA III connection. Drives’ specified Mean Time to Failure (MTTF) is about 1.5 million hours, which should be enough for a year or two or it will be good enough for about 80,000 reads and 35,000 Random 4 KiB IOPS writes, which is not bad at all. Toshiba is one of the leaders in NAND flash production and it hopes to firmly assert itself in that position in the next year with this new line.

Another interesting press-release comes from Corning, a glass company famous for having its product used on every iPhone produced to date. The company announced that it developed an ultra-slim flexible glass. Bendable glass is not really the news, but the fact that it came from Corning this time gives us hope that its partners, which includes Apple and Samsung, will soon begin working on prototypes of phones and tables with unusual shapes or those that you can easily fold and put away in any of your pockets, unless this is what the iPhone 5 is going to be like, which I doubt. The flexible display will allow the companies to market their products in new, interesting ways. The company included the following statement in their press-release: “The thinness, strength, and flexibility of the glass has the potential to enable displays to be “wrapped” around a device or structure.” The company acknowledges that this technology is in its enfant stage, but it hopes that in the future it can be also used in fields other than consumer electronics; for example as a light source or a flexible solar cell.

Previous story Google Warns Users of Flame Next story Apple Has Run Out of Breakthroughs?