Ambulance Drones Could Be Real Life-Savers 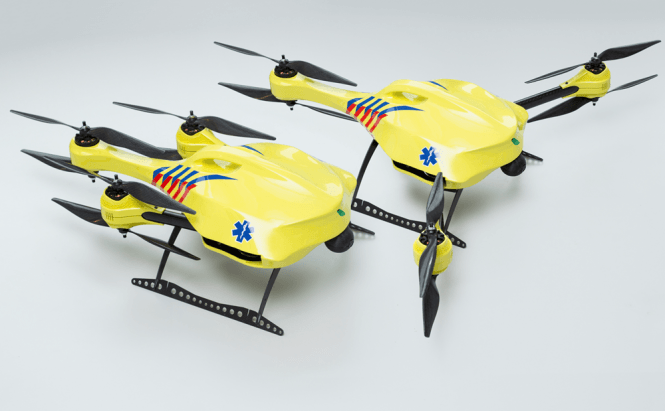 Ambulance Drones Could Be Real Life-Savers

Ambulance often gets stuck in traffic and even with its sirens there are times when there's simply no room to pass. That is why cardiac arrests have 8% chances to survive. The Ambulance Drone is a prototype that could bring those badly needed defibrillators to patients in just a few minutes.

The Ambulance Drone is an autonomous device that can fly to the patients' location based on the GPS tracker embedded on the phone from which the emergency call originated. Developed by a graduate from the Delft University of Technology in Netherlands named Alec Momont, the prototype could increase the chances of survival for cardiac arrests to 80%.

The drone weighs 4kg and can fly with a speed of 100 km/h. The prototype combines a carbon fiber frame with 3D-printed micro-parts. In simple terms, the Ambulance Drone can get to anywhere in 12 km area in just a minute. It also embeds a webcam so that the paramedic that received the call can direct the caller in how to use the defibrillator and what to do next.

The obvious advantage is that the Ambulance Drone flies over the traffic so it will get to the patients a lot quicker than the ambulance. With a smartly designed network of drones, you can easily cover an entire city and provide instant help to any cardiac arrests cases. Unfortunately, the prototype has a few issues to overcome. For starters, in the Netherlands, autonomous flying devices are illegal, so testing it out in realistic situations might be a bit difficult. Lastly, the device ability to avoid obstacles needs to be impeccable to ensure that it arrives safely to its patients and that it doesn't hurt anybody on its route.

Previous story Telegram - The Best Instant Messenger Out There? Next story Tired of Receiving Work Emails at Home? Here's the Answer