Google Glass Apps to Save Lives

A self-taught programmer and firefighter Patrick Jackson from North California has released two applications for Google Glass which can be of great use for firefighters. 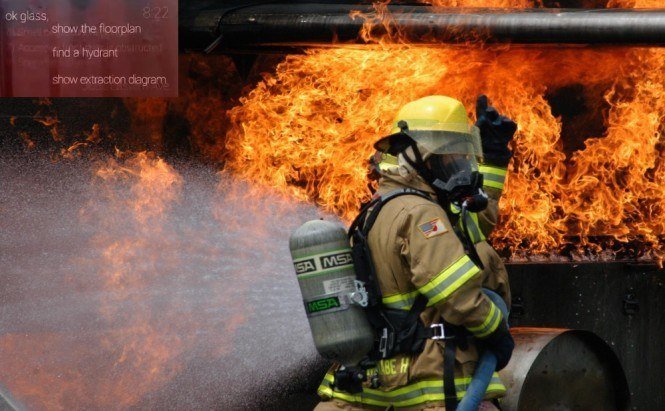 Google Glass Apps to Save Lives

A self-taught programmer and firefighter Patrick Jackson from North California has released two applications for Google Glass which can be of great use for firefighters.

When there's a fire, it is vitally important that all the necessary information is quickly relayed to the firefighters. Every little detail counts: the exact address, the fastest route, the building plan, potential hazards, hydrant locations, and camera recordings â€“ everything that could help the professionals make it to the incident faster and do their job more effectively. This is where a bit of technology might help. Jackson assumed that Google Glass, Google's experimental head-mounted device, could be used to feed all that important data directly to the eyes of a firefighter, without distracting them or obscuring the view.

"I'll hear a little notification and can look up into the top corner of my vision and see a map of where it is. I see the location of the incident and what type of call it is," Jackson said.

Interaction with other devices and alert systems, such as radio, computers, smartphones, and tablets is a nice bonus and may help firefighters be even more efficient, thus lowering the potential costs of each incident. Anyway, there are still some pitfalls on the way of further development and distribution of this technology. First of all, Google Glass is not quite designed to be worn with oxygen masks (which firefighters do tend to use). This has already prompted some USA fire departments to start working on taking it to a next level. For instance, researchers are experimenting with wearable technology that would allow firefighters to use additional sensors to track vitals and environmental conditions like air pollution and temperature.

Secondly, not all fire departments are rich enough to invest in the new technologies. This will remain a major problem until Glass becomes more widespread and much cheaper. Right now, the cost of one Google Glass device is $1500, and it's only available for developers and testers (so-called explorers). It is still not clear how much the consumer-grade device will cost, let alone how much it will cost with specific custom software preinstalled on it. At the moment, it's much cheaper to just use tablets, since they can provide firefighters with the same information like call notes, maps, locations of hydrants, etc. The downside is that you can only use them before you get to the fire.

People like Patrick Jackson, who can find some genuinely helpful uses for Google Glass, hope that the obstacles are surmountable. It's a new product, and it desperately needs some â€œkillerâ€ uses to prove its worth, to prove that you can't just replace it with a tablet. Let's hope that they're right, and that Google Glass will actually bring benefit to mankind.

Referenced Windows applications
Google Glasses or tablets? Which devices could be more useful for the firefighters?

Glasses aren't useful for me.

Sorry there is an error in perception. Fire fighters can never and will never use oxygen masks. If you are referring to the Self Contained Breathing Apparatus - SCBA, that is just compressed air, the same you and I breath at any given moment. Oxygen will conduct itself as a fire accelerate if you will. The bad thing to breath in a fire, don't you think?