Google+ Events: Google Saves the Day for Its Social Network?

Google has brought in a bunch of new Google+ features in a desperate attempt to shake off the Internet ghost town reputation. Google+ Events is the... 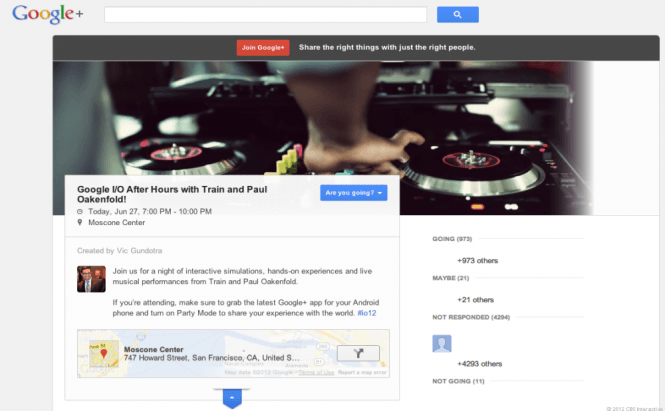 Google+ Events: Google Saves the Day for Its Social Network?

Google has brought in a bunch of new Google+ features in a desperate attempt to shake off the Internet ghost town reputation. Google+ Events is the definite highlight of the changes to the platform and, by far, the coolest one.

The modern concept of partying has undergone significant changes since social networking came to our life. In the good old days, when people said 'partying', they meant excessive drinking, dancing and communicating: all sorts of things associated with having a nice time out there.

These days, the borders between the online and offline worlds are becoming increasingly fuzzy to the point of being, well, virtually non-existent. The mesmerizing social-network principle 'a proof pic or never happened!' has made it to the banners held by our Web 2.0 generation. And the modern-way parties are one of the clear proofs of its dominance: people feel obliged to take hundreds of party photos and share them on any social network account within their reach, as if the party would be no fun otherwise.

Demand creates supply, so every respectable social network has been long featuring some kind of event pages, where people could inform their friends about upcoming events like birthdays or reunion parties and give a brief account of them later. The problem with the event pages is that most of them are hopelessly outdated and haven't seen any changes in years. What was the cutting edge in 2007 is nothing but shame in 2012, but social networks don't seem to bother about it. Well, with the only – and quite surprising one at that – exception of Google+.

I didn't think I'd ever say this, but Google+ Events are really cool, especially when you compare them side by side with their pitiful Facebook counterpart. First of all, I love how it looks: the animated themes, similar to cover pictures in the Facebook Timeline, are awesome, and the Google+ minimalistic design doesn't give you a confusing impression anymore. Yeah, I know, it doesn't take much to beat Facebook's Event page design, but we should admit that Google has really got it right with the visual part this time.

The inviting process is also well thought-out. First, you may not limit yourself to your Google+ friends: you're free to invite your buddies from outside via e-mail. This feature alone makes Google+ Events twice as functional in my eyes. The next step is that once you got the invitation and confirmed it, the events start being displayed in your Google Calendar so that you don't forget about them (which I do regularly), and it can really come in handy if you happen to use this Calendar (which I never do).

At last, when the fun begins and the party finally starts, you can switch on the so-called Party Mode, when all the snapshots that you or your inebriated friends make with your mobile devices are automatically uploaded to a centralized Events page. Thus you and your friends can create a special Google+ page dedicated to your event, stack with photos, videos and whatnot.

All in all, Events is the first Google+ feature that I am able to like. Although not indispensable, it can make the Google+ platform into something we all want it to be: not Facebook. And if it will, a wonder can happen and people start really visiting Google+.

How often do you visit Google+?

Quite often. It's a good way to advertise products or services. It's great that they try something new.

A couple days a week.