New App Can Tell You Who Deleted You on Facebook 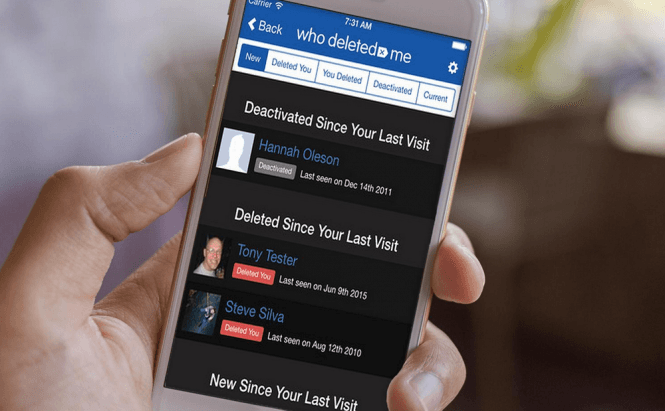 New App Can Tell You Who Deleted You on Facebook

For many people, there is no greater insult on the Internet than being removed from someone's friends list on Facebook. In case you're worried that someone has unfriended you, but you need some proof in order to confront them or take revenge, don't just stand there. A new app called "Who Deleted Me" will let you find out who those fair-weather Facebook friends are. The application, which works on Android and iOS devices or as a Chrome extension, shows you which of the people in your list no longer want / need your friendship.

Created by Anthony Kuske (a UK-based developer), the app was previously a part of Facebook but has since been removed by the social network because, apparently, it provided "a negative user experience.” Now it's back and this time it shouldn't be disabled as it no longer uses social network's API, but instead takes all the data it requires from the user's main Facebook page. The users of the application have recently experienced a few outages, but that was due to overwhelming amount of traffic which the tool received and not because of the social network. Besides disclosing who removed you from their friends list, Who Deleted Me can also tell you which of your contacts have disabled their accounts since the last time you logged-in and who you deleted. In order to use the app and check out its functionality for yourself, all you have to do is to install it, and then connect to your Facebook account. Unfortunately, the app does not work retroactively, so you will only be able to see those who unfriended you after Who Deleted Me was installed on your device.

If you're interested in downloading the app, Android users click here, iOS customers use this link and those who want the Chrome extension should visit this URL. Who Deleted Me can be used for free.

Previous story 8 Google Maps Tricks You Should Try Out Next story Google's Self-Driving Cars Are Now Arriving in Austin, Texas