This wearable will make your kids want to play outside 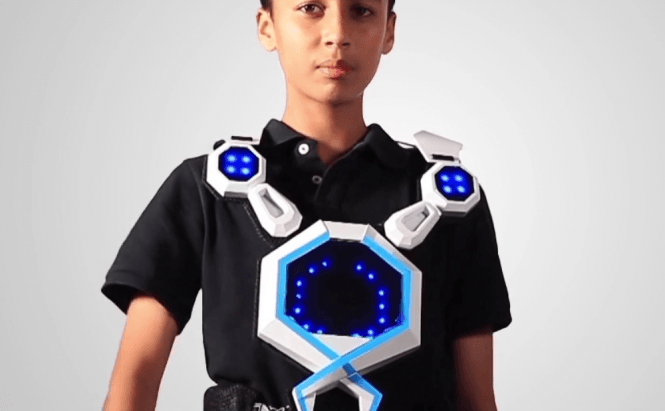 This wearable will make your kids want to play outside

I've been quite worried that today's kids will no longer want to play outside as the backyard or playground can no longer compete with the magical worlds that video games take them to. It seems that I'm not only concerned about this as a company called MadRat Games came up with a new wearable that encourages kids of all ages to play outside. SuperSuit is a wearable gaming platform that made its debut at this year's Consumer Electronics Show (CES).

The kid in me got a bit excited when I saw this product, but I'll try to stay calm and tell you what it's all about. The SuperSuit wearable is made up of a SuperVest that reacts to various inputs, lights up and can talk to its user, a SuperGlove, which lets you send commands, perform gestures or control bots and a SuperBeacon that senses when other players are nearby. To be perfectly honest, the SuperSuit does look a bit goofy, but it comes in four color choices: light blue, orange, green and purple, so at least it will be goofy in your kid's own style.

What I find really cool about this product is that it isn't a game, but a gaming platform. At the moment, you can use SuperSuit to play laser tag, capture the flag or hide-and-seek with other kids wearing it, but if the wearable catches on, third-party developers can create new and exciting games on the platform, taking full advantage of the wearable's capabilities. Additionally, the suit can also control bots designed to work on the platform, a feature that can give it some very interesting uses. Another positive aspect is that, despite the fact that the suit can work on its own just fine, the developers are working on iOS and Android apps that upload the data from the suit via Bluetooth.

As far as drawbacks go, the product is too new to be able to draw any clear conclusions. Probably the thing that I like the least is that there is no information about when the product will start shipping out or how much it will cost. Another problem will be the fact that in order for this wearable to be actually fun, other kids must have it too, so this will take a bit of coordination between the parents. Furthermore, the SuperSuit has to be powered by batteries, but there's no indication if it uses regular ones, custom ones or even how long these will last. Lastly, kids are notorious for constantly bumping into things or falling, so it would also be really interesting to know how resilient the product is.

In case you're interested in reading about more cool wearables, you should check out "The best wearables to come out in 2016". If you like a more traditional approach to gaming, you will enjoy reading about the "Best action games of 2015" or finding out what the "Best episodic games" are.