Vivaldi is now ready for its Beta stage 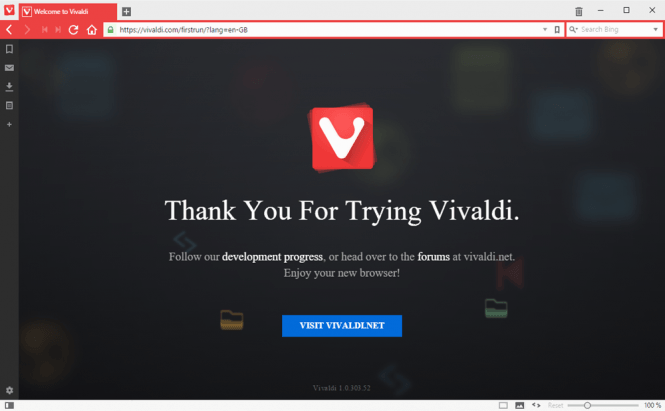 Vivaldi is now ready for its Beta stage

I'm not sure if you remember, but about 9 months ago I've talked to you about a new browser called Vivaldi which was being launched by some of the guys who also created Opera. The novelty web browser could be downloaded as a technical preview, but although it worked decently, nobody would have made it his or her default browser. Over time, the team designing it has solved most of the application's bugs and added almost all the planned features, so they've decided that it's time to take the next step and launch the beta version of Vivaldi.

I've already tested this new version of Vivaldi and I must admit that it's pretty cool. The browser allows its users to write notes on the go, offers quick commands and provides tab stacking capabilities (a feature that we've already discussed in the "Tab Stacking Is Vivaldi's Most Awesome Latest Trick" story). Another thing that I really liked is that the application is highly customizable allowing you to modify basically every of its aspects. And, saving the best for last, Vivaldi enables you to extend its capabilities however you see fit by downloading and installing extensions from the Chrome Web Store.

As far as the negative aspects go, the Mail feature isn't yet completely ready and the syncing functionality isn't available, but being completely honest, since the browser only works on Mac, Windows and Linux you can easily live without the sync feature. Furthermore, you should remember that the version being launched is a beta one and not the official release, so there are still many bugs and other issues to work through. However, if you like trying out new stuff, Vivaldi is definitely worth your time. In case you want to explore some other Internet browsing alternatives, you should read my previous article: "New Browsers That Have A Chance Of Making It Big".