When did you laugh with your friends last? Fight your mates in Worms and have fun, trying to get the advantage in strategy over them. 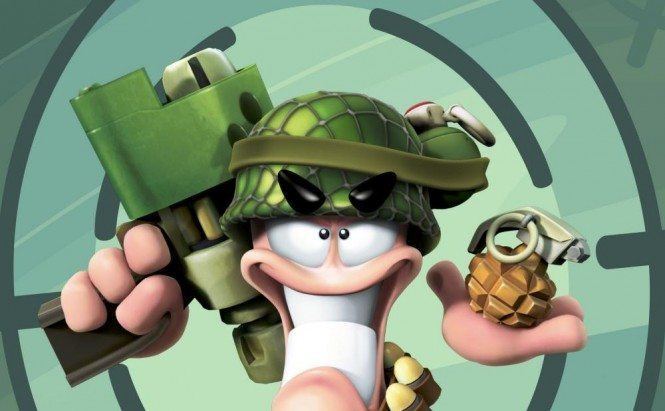 Team17, the British game developer, has created a number of games, some of which have become legends, like the Worms series. Worms saw about 24 releases over the last decade, not mentioning the editions for portable devices.

The creator of the idea behind the game is Andy Davidson, who initially wrote it for fun. Team17 helped him to finalize the game and show it to the world. Thus, in 1995 the first Worms game was offered to the public and gained the love and favor of people. Nowadays, the game is available for a number of platforms, including PC, MAC, iPhone, Android, Symbian, PlayStation and Xbox, versions for social networks can be found too.

From the very first copy of the game the main characters have been worms: the pink, short, and funny armored crumbs. These creatures are teamed up into several fractions that fight each other. Thus, you find yourself involved into an artillery strategy game, which is especially fun to play with a friend. Levels are very unusual and can be randomly generated or chosen from a preset if you want. Destroying cheese lands or cans is very entertaining. Mind, that you have to aim as precise as you can trying to get your opponents worms. This might turn out to be a challenging task: the scenery is tricky with lots of bends, hooks, and objects sticking out. You can play on the open terrain, like islands, or in caves, where some weapon restrictions are applied. 3D game version is bound to the island version as there are some camera restrictions. Worms World Party Has a Wide Range of Weapons

Concerning the graphics, it is remarkable that all Worms look cartoonish (of course, with different degrees of that). With newer versions, they elegantly moved from 2D to 3D style, making the game more beautiful and more challenging at the same time. All weapons have specific animations applied and are interesting to watch. Some weapons you have to control manually, like the Flying Sheep. Even sounds within the game carry a bit of humor. Those who have played this game once will never forget the remarks the worms make, when hit by an opponent or their team mate. They are recorded in a high pitch, that perfectly suits the tiny creatures, which may not only call you a 'betrayer', but shake their fists at you in anger.

From 2003, when the first 3D release was launched, we can feel what it means to be a worm in the game. It became harder to aim, some weapons fell out of the available list, but the game received a different in-game-presence feel.

Enumeration of all 24 editions of Worms would take too much space, thus, I'd like to mention only those I enjoyed myself. These would be: Worms World Party, Worms 3D, Worms for Symbian (Worms World Party variant) and Android (Worms 2: Armageddon). Android version and iOS version are very close to each other, thus can be counted for one in terms of how they are perceived by the player. Crazy Golf Is Quite Challenging

Worms World Party and Worms 3D are the two nice representatives of how drastically the game changed in 2003. For me the move to 3D was a difficult process. At first, the game felt inconvenient and irritating, some of the favorite weapons could not be used, and not many of my friends agreed to play it. So, it took time to find out the sides of the Worms 3D to love it for. But, despite my experience, I am totally sure that there are people who truly enjoy the three-dimensional variant of the game from the first start. Symbian Version Is Hard to Control

The Symbian and Android versions have one thing in common: they are not as convenient to play as we would like them to be, especially compared to computer releases. The controls turn out to be more challenging, though preserving the same amount of joy. Compared to each other, Symbian edition is harder to master in the above mentioned terms, than the Android or iOS applications. Noteworthy, there are more game releases for Apple portable devices. Of course, mobile apps are in 2D, but this doesn't make them less interesting. Besides, they provide you an interesting pastime during your trip. Worms for Android is Fun to Play with a Friend

Summing up, after the evolution the game has undergone, it is hard to tell which of the 24 releases is the best as tastes differ. For myself, I found that the good old two-dimensional variant is my favorite, and what is your choice? Feel free to share your experience about the game series in the comments below.

Which is your favorite?
View results

Would love to play the game!