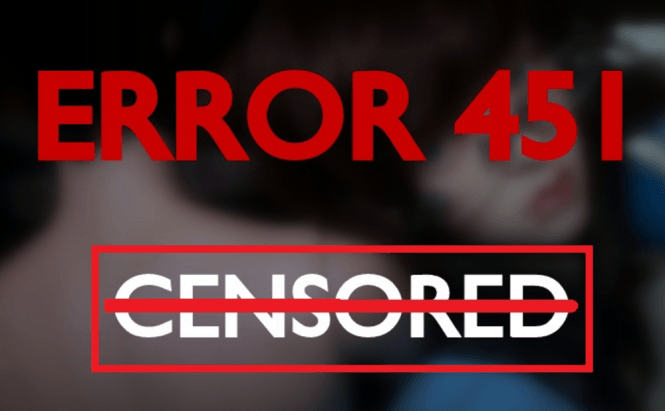 In case you live in a democratic country, you've surely heard that whole speech about how information should be available and accessible to every citizen or the one about freedom of speech and thought. If you're familiar with these concepts, then you will probably be very surprised to know that the IETF HTTP Working Group has just approved the 451 code proposal. What's that, you wonder? Whenever you try to visit a website that has been blocked for legal reasons, you will now see a HTTP 451 error code. The proposal for such a code was first submitted all the way back in 2012 and the Internet Engineering Task Force (IETF) has finally agreed to make it official.

In case you're not a tech-savvy person, the Internet Engineering Task Force or the IETF is the body that sets the standards for the Internet. This means that their rulings have to be followed by every member of the conventional Internet in order to have a unified, standardized platform that everyone can understand. Why do we need a 451 code? Well, there are some cases when such a thing is actually necessary like when a local police force takes down a site that contained illegal content, but unfortunately, there are also many times when different governmental bodies choose to censor the information in order to stop it from reaching the general public.

Mark Nottingham, chair of the IETF HTTP Working Group stated: "By its nature, you can't guarantee that all attempts to censor content will be conveniently labeled by the censor. [..] Although 451 can be used both by network-based intermediaries (e.g., in a firewall) as well as on the origin Web server, I suspect it's going to be used far more in the latter case, as Web sites like Github, Twitter, Facebook and Google are forced to censor content against their will in certain jurisdictions."

In case you like this news as much as I do, you might want to know that TOR has decided to use crowdfunding instead of government money or learn more about cyber-warfare and the future.