Have you ever wondered which operating system is better: Android Lollipop or iOS 8.1? This article can help you figure it out. 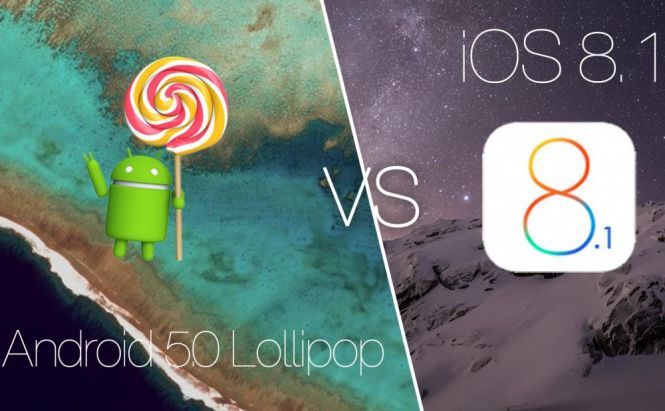 The world of smartphones is ruled by two dominating operating systems: Google's Android and Apple's iOS. If you would only take the numbers into consideration, Android would have been the winner by far as it has approximately twice as many users as Apple's OS, but that comparison isn't exactly fair. Why? For starters, Apple's devices are a little less affordable for the low-income buyers, so it would be like saying that Renault cars are better than Mercedes because more people buy them. Furthermore, iOS only works on iPhones, while Android works on a wide array of manufacturers. This is why, in order to determine which operating system is better, Android Lollipop or iOS 8.1, we need to dig a little deeper with our analysis. Let's be honest. Before you get to run apps and see what the phone's capabilities actually are, what most people notice is the graphics on the display. Since Apple is a company that generally focuses on design, the iOS operating system used to have a huge lead in this area, but this is no longer true. Don't get me wrong, iOS 8.1 looks amazing and I'm not sure what they could've done to make it better. The only problem is that Lollipop looks awesome too. The addition of Material Design didn't only improve the visual component of the operating system, it also brought a huge enhancement in the motion physics. From my point of view, this is a chapter where the two can't be separated. There are a few things to consider here: let's first take a look at the most basic function of a smartphone: the dialer and phonebook app. iOS offers an intuitive interface with a minimalistic design, but unfortunately, it is very close to becoming actually boring, having nothing special to offer. On the other side, Lollipop brings a fresh design, while also being easy to operate and full of handy features, such as the ability to search not only through the contacts list but also for nearby locations, like restaurants, hotels, etc., when using the in-app search bar. As far as I'm concerned, this one goes to Android, with one small exception. On iOS 8.1 you can block calls and texts coming from a contact, while on Lollipop you can only block a specified phone number. I know what you're thinking: Android is clearly winning this round, right? Wrong! Because of Apple's stubbornness when it comes to design, Google's operating system used to be far better when it comes to how much you can personalize your phone and the use of widgets. However, iOS 8.1 came with a new approach and allowed its customers to install third-party widgets. iOS might still be a bit restrictive and offer less widgets than Android, but in this case simpler is actually better. Moreover, even though both operating systems can group applications into folders (for organizing purposes), Lollipop limits you to 16 apps, while iOS 8.1 doesn't impose a limit. It may be a small difference, but it's enough for me to think that Apple has Google beaten on this one. Two words: Touch ID. The fingerprint security feature is the biggest advantage that iOS 8.1 has over Lollipop in this category. And it's not even that big of an advantage since Lollipop introduced the NFC security system (the one where you pair your phone with another device, and you can't unlock the smartphone without it). Other than that, the lock screen features and design are basically identical. The home screens are also equally good, with the exception that Android has that handy App drawer that iOS lacks. However, when it comes to notifications, Lollipop brought a huge improvement compared to previous Android versions. Not only are you now able to access them without unlocking your screen, but the operating system uses a personalized smart sorting algorithm to prioritize them by importance. Even though Apple's capability of displaying "bubbles" to show which app has a new notification is pretty neat, I'm still going to give the win to Lollipop here. Clearly, both operating systems support a wide number of apps, allow you to multitask and can help you with your work as well as keep you entertained. However, one of them has a huge advantage over the other when it comes to how much it can help you in your real life and that is the iOS 8.1. I know Android has features that, for the most part, match the ones on iOS, but they're just not good enough, because Apple is close to being the national American mobile operating system. This means that there are more possibilities for it, such as the implementation of the Apple Pay system. It may be a bit unfair as it's much easier to do something like this within the borders of a single nation, than across the borders of multiple countries, but that's just the way things are. Furthermore, in Iowa they are even working on an iOS app designed to replace the traditional driving license. Even though Android offers a basis for this kind of apps, at the moment, it doesn't come close to the possibilities offered by iOS 8.1.

I hate to leave you hanging, but it seems like we have a draw here. As I've said in the beginning of this article, these two operating system are both awesome, so the contest is incredibly tight. But, if you insist on reading my take on the matter, here's where I stand. If you live in the US, then iOS 8.1 is the better option for you by a mile. However, if you're not an American, then Android phones are probably much better suited for your needs.

P.S. I know there are some of you who think that I forgot Windows Phone, but, in its current form, Microsoft's mobile OS just doesn't get close enough to the other two. Hopefully, this will change once Windows 10 is officially launched.

Which one do you prefer?
View results