Check out this octocopter designed to capture smaller drones 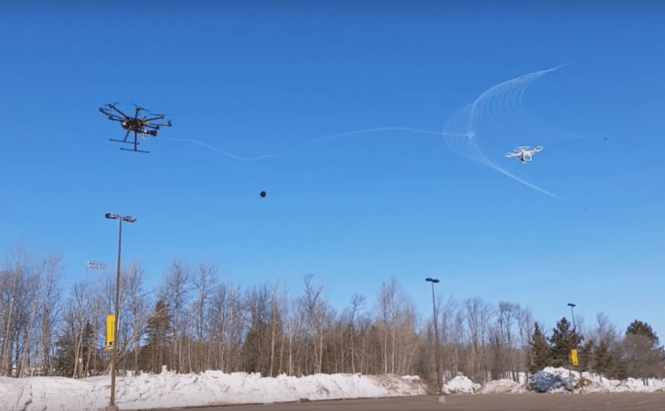 Check out this octocopter designed to capture smaller drones

Those who use drones for mischievous purposes or in restricted areas, watch out! The authorities will soon have a new octocopter capable of capturing and retrieving smaller drones. A team of students from the Michigan Tech University has created an anti-UAV drone that captures its targets instead of destroying them. The octocopter is larger than most UAVs and uses a ballistic cannon to shoot a net which allows it to drag its capture to designated locations. I've included a video of the device in action at the end the article, so you can see for yourself that even the prototype works pretty well. Image from the captured drone camera

According to the team that created the octocopter, the device can fly autonomously or be controlled by two people simultaneously (I'm guessing that one is in charge of flying and the other of shooting the net). The way it works is pretty simple (as long as you don't get into any technical details): the anti-UAV gadget is designed to be faster and more maneuverable than almost every drone that you can buy. Once it gets within a 40-foot (about 12 meters) of its target, it "throws" a net on the smaller drone making it succumb to gravity and then carrying it to a designated location. Unlike regular anti-UAV devices which destroy their target, this octocopter will be perfect for law-enforcement agencies as it preserves the drone intact so that is can be used later as evidence.

Talking about the team's creation, professor Mo Rastgaar stated: "What makes this unique is that the net is attached to our catcher, so you can retrieve the rogue drone or drop it in a designated, secure area. It’s like robotic falconry." At the moment, there is no information about when the octocopter will become available or how much it's going to cost, but Mr. Rastgaar sated that they intend to file a patent for the creation.