New laptop shell turns your smartphone into a PC 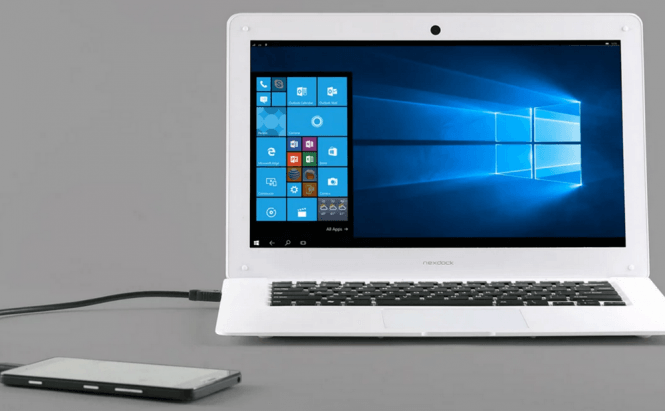 New laptop shell turns your smartphone into a PC

Modern smartphones are becoming more and more powerful. I'm not sure if you've noticed, but most of the current middle-range smartphones are better than the PCs that you had 6 or 7 years ago. Microsoft has already noticed this and created the Continuum technology which allows Windows Phone users to turn their mobile devices into computers, but very few people actually own Windows-powered phones. The good news is that there's a new product called NexDock. It extends this functionality to more devices and operating systems.

NexDock is a brand-new laptop shell using your smartphone's hardware (RAM, CPU and storage space) to run. All you need to do is connect your device to the shell, and you will be able to control it like a laptop and see the images on a 14.4 inch screen. By itself, NexDock will cost $80, but if you want the whole package - the laptop shell plus a Bluetooth keyboard  and a 10,000 mAh battery - you will have to pay $150. A big advantage of this product is that it works with a wide range of devices: Windows 10 smartphones and tablets, Android-powered phones, iPhones, Raspberry Pi mini computers, PC sticks, etc. At the moment, NexDock is part of an Indiegogo fund gathering campaign, so if you are in a hurry, you might be able to pre-order it and save some money. The laptop shell should start shipping out at the end of June.

To be honest, what I find to be even more interesting are the future possibilities this project brings. Just think about being able to use your mobile device as your regular personal computer no matter where you are. And since we're speaking about interesting things that will most likely happen sooner or later, you might also want to take a look at our previous articles: "VR in 2016: What will the future bring?" or "Cyber-warfare and the future".