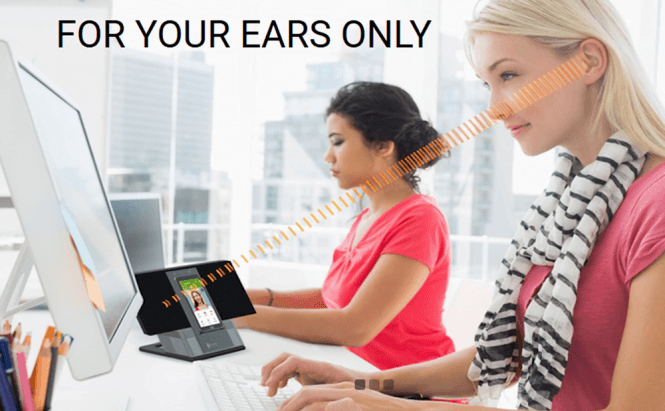 As far as I'm concerned, headphones are a necessary evil: I don't really like wearing them, but I wouldn't want to hear other people's music while I work and I wouldn't want to bother others either. Unfortunately for me, earbuds never stay in my ears and since I wear glasses at the PC, normal headphones are pretty uncomfortable as well. This is why I really liked the new prototype that Noveto created. The company came up with a system of directional speakers that can focus the emitted sound waves so that only your ears can hear them.

What's really cool is that the device also embeds head-tracking technology so that the sound will follow you across the room without you having to wear any kind of additional hardware. Another interesting thing is that the company is thinking about using their sound system for a wide array of devices including PCs, TVs and smartphones. Just think about how cool it would be to be able to put a conversation on speaker, but still be the only one to hear the voice at the other end of the line. Or, better yet, how it would be like to be able to watch and, most importantly, listen to a movie or sports event in bed while your significant other is sleeping next to you. If you're interested in how all this works, it's quite complicated, but I will try to explain it at least as far as I could understand it. The device users transducers (which are capable of focusing the acoustical energy to the users ear without moving) and a set of intelligent 3D sensors and cameras that constantly track the user's position. From what I've read, the device will cost somewhere between $300 and $500, but I don't have any information about when it will become available to the general public, so we might have to wait a while until we actually have one in our homes or offices.

If you're interested to see more really cool audio devices, you should check out the custom fitted wireless earphones called Revolvs or Google's Enterprise-like communicator badge.