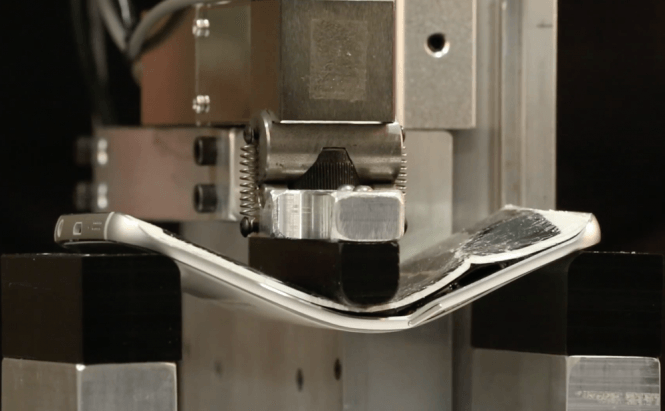 After what I assume to be hundreds of lawsuits all over the world, Apple and Samsung may soon have a new infringement dispute. It seems that one of Samsung's latest smartphones (Galaxy S6 Edge) bends, a feature which was until now only associated with the iPhone 6 Plus. According to SquareTrade, the test they performed has shown that the S6 Edge requires exactly the same amount of force as the iPhone 6 Plus to bend.

SquareTrade's video test (which was posted on YouTube) shows that the Galaxy S6 Edge requires a force equal to 110 pounds (approximately 50 Kg) to bend and 149 pounds (67.5 Kg) to crack completely. In order to bend the iPhone 6 plus you also need 110 pounds, but it takes 179 pounds (81 Kg) to break it. However, while Apple's product was only deformed by the 110 pounds of pressure, when Samsung's smartphone was bended, its glass also cracked.

What baffles me is that when the rumors about the iPhone 6 Plus first appeared, there were a lot of YouTube videos in which regular people were using their hands to curve the device - a thing that now is not really happening. This makes me pretty sure that this isn't actually going to turn into the next Bendgate. But being totally honest, if you really want a big phone but you don't want it to bend, how about not keeping it in your back pocket? You probably paid a lot of money for the device, so don't sit on it and everything should be fine.