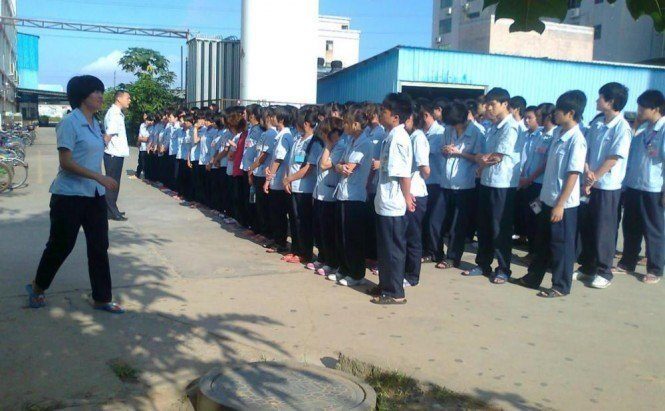 Samsung has become the focus of the public attention again. China Labor Watch (CLW), a whistleblower organization, protecting Chinese workers' rights, has accused the Korean company of exploiting the child labor in one of its Chinese factories. HEG Electronics, one of the Samsung suppliers, has been reported by CLW to systematically break the labor laws of the Chinese People Republic by making school students of the age under sixteen years old work long hours under totally inacceptable working conditions.

'...[C]hild labor is a common practice in the factory.' These words can spark up a new major scandal with Samsung involved. Forget about the patent war with Apple, which has bored even the most avid fans of the both companies and their products. A new war has been declared: the labor exploitation one.

HEG, one of Samsung's Chinese manufacturers that also alleges to be doing processing work for Motorola and LG, has taken the public criticism baton from Foxconn. According to the 31-page report by CLW, the child workers of HEG are subject to drastically poor and even dangerous working conditions as well as 'discrimination based on sex, age, and individuality during the hiring process', 'legal problems' in their labor contracts and 'extremely strict punishment system'. The whistleblowers have come to the conclusion that children account for approximately 60% of the HEG workforce with peaks of up to 80% in the winter and summer breaks. At the same time, the underage workers are exposed to the same harsh conditions as the adult ones while being paid only 75% of their wages.

In their initial reponse to CLW's report, Samsung told the German magazine DER SPIEGEL: 'We are following the highest standards of working conditions.' That reaction is siginificantly different from that of Samsung's arch-nemesis, Apple, which have found itself in a similar situation earlier this year.

In winter 2012, Apple was fiercely criticized by media for the poor working condition in the factories of Foxconn, the Cupertino devices major manufacturer. The company responded with a large-scale audit by the Fair Labor Association in an attempt to save face in that uneasy situation.

The two patent rivals are not the only big corporations that have drawn the attention of CLW. In their 136-page strong report 'Tragedy of Globalization: The Truth Behind Electronics Sweatshops', the human right activists took a closer look at the working conditions in the Chinese factories of such major tech companies as IBM, Microsoft, Dell, etc. Conspicuously enough, Samsung has lost even that battle to its American rival. CLW states that 'working conditions at HEG are well below those general conditions in Apple’s supplier factories.'

Do you think Samsung was unaware of the child labor in its factories?

Previous story So, the Decision is Finally Made Next story A Dem Convention Video Blocked Due to Copyright Reasons