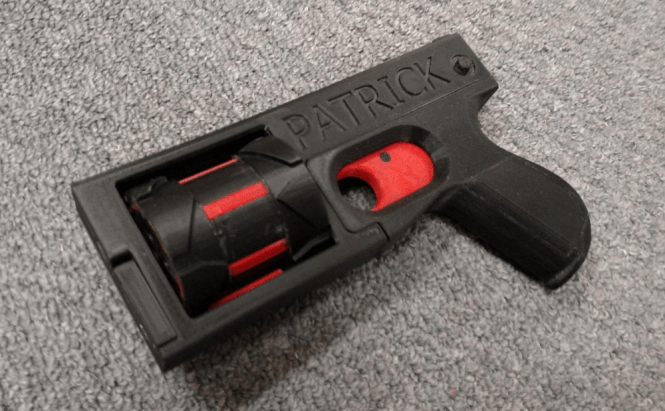 Maybe I have a naive brain, but up until today, whenever I thought about 3D printing I envisioned all kinds of harmless or even helpful things such as 3D-printed human tissue, or even 3D-printed food products, but no human invention can be exclusively used for good. A mechanical engineering student named James Patrick has just created the world's first 3D-printed repeating firearm, which can fire up to eight consecutive bullets without reloading. To be perfectly honest, I must admit that the PM522 Washbear looks pretty cool, but I can't help but wonder how much harm this kind of technology can do. The pistol is almost ready to go as soon as it comes out of printer. All the gunner needs to add is an elastic band spring, a metal firing pin and steel rods. Thanks to the last items on the list, the PM522 Washbear can be detected by metal detectors, but the 3D printed bit is made out of ABS plastic or a durable nylon material, and that can pose a big problem for airports or other places that usually scan people for weapons. The revolver uses a 6- or 8- pepperbox-style chamber, which is very easily replaceable as it's only held in place by a pin. The cylinder is connected to the trigger with the previously mentioned elastic band spring so that it can automatically reposition itself after each shot. Moreover, while the trigger is coming back to its place the cylinder is moved off the center to prevent you from accidentally firing the gun if you drop it.

Currently, the PM522 Washbear is compliant with the U.S. gun regulations, so it is detectable, but once other people figure out the design of the gun, they might not be ethical enough to add the metal parts, which (as I said) can be a problem. Moreover, the fact that guns can be simply 3D-printed instead of acquired through the proper channels, can put a dent in the plans of governments that are trying to control their citizens' access to firearms.